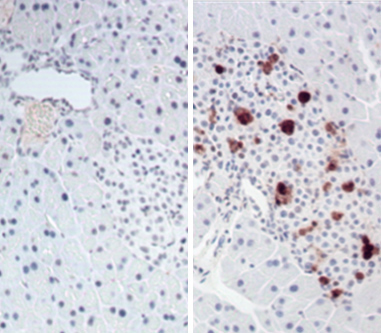 Too much Myc causes stress in tumor cells. The images show pancreatic cells. Controls are presented on the left, and Myc-expressing cells on the right. The red coloring indicates cellular stress (Daniel Murphy)

Cancers develop due to changes in genetic material that ultimately trigger uncontrolled cell growth. In the majority of human tumors, the Myc gene has been altered such that it is excessively active. As a consequence, the tumor cells produce far too many Myc proteins.

What exactly do the Myc proteins do? They bind themselves to the genetic material in the cell nucleus and ensure that genes are activated. However, given that there is an “overdose” of them in tumor cells, they regulate very different genes there than in normal cells – with fatal consequences. “This pattern of gene activation is very specific for individual tumors. It even allows statements to be made about how aggressive a tumor is, and it enables prognoses concerning the progression of the disease,” says Eilers.

Scientists know of a total of a few hundred genes that are activated in tumor cells by Myc proteins. But in fact the Myc proteins bind to tens of thousands of genes. Why do they attach themselves to so many genes, but only activate a few of them? What exactly constitutes the difference between binding and activation? This question has always puzzled scientists.

Now, more clarity is being brought to this issue by new research findings from the University of Würzburg that have just been published in the magazine “Nature”. Susanne Walz, Francesca Lorenzin, Elmar Wolf, and Martin Eilers from the Biocenter have discovered that the Myc proteins in tumor cells are not always alone when they bind to the genes. They are usually closely connected to a partner protein (Miz1). While Myc on its own activates a gene, the exact opposite happens if both proteins are present as a pair: gene activation is suppressed.

The Würzburg research group interprets this as a defense response: “It would appear that the cells recognize that they are producing too much Myc and try to counteract the stress created by this excessive growth signal.” This generates a balance between activation and suppression that is slightly different for every gene in tumor cells. This in turn results in the characteristic gene activation patterns that distinguish tumor cells from normal cells.

According to Eilers, this new finding is not just of interest to basic research: “We can now identify genes that are specifically only transcribed in tumors and not in normal cells,” explains the professor. This offers new starting points for treatment. Eilers’ team is now keen to pursue these new approaches further and to do so in close collaboration with the cancer center at the university and university hospital, the “Comprehensive Cancer Center Mainfranken”.