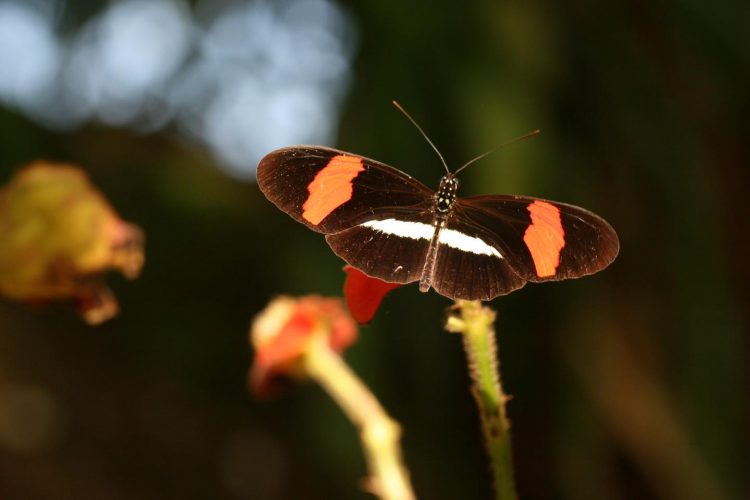 This is a passionvine butterfly (Heliconius erato demophoon) feeding on a Psychotria flower in the wild in Panama. The cortex gene controls the yellow bar on the hind-wing. Credit: Chris Jiggins

Using a reverse paint-by-numbers approach, scientists have located another gene that controls the brilliant patterning of Heliconius butterfly wings. Led by former Smithsonian Tropical Research Institute (STRI) fellow Nicole Nadeau, the researchers identified variations in the gene that correspond to wing color and pattern variation in three different Heliconius species. Published in Nature, June 2016, the discovery puts scientists a step closer to unlocking the code responsible for diversity and evolution in butterflies and moths.

Found in the Neotropics, the 45-odd species of Heliconius, also called passionvine or longwing butterflies, have more than 400 different wing patterns, typically of varying shapes of red, orange, yellow, black and white. Individuals of the same species from different regions have different markings, while multiple species in the same region mimic each other's patterning. Local birds learn to associate one distinctive-looking unpalatable meal with another, regardless of species. Scientists use the same visual cues to uncover the genes working behind the scenes.

“Essentially, we are visualizing evolution on the wing,” said co-author Owen McMillan, staff scientist at STRI. Passionvine butterflies are a unique model for studying evolution because different species have independently and rapidly evolved similar, visible solutions for survival. “We can connect the dots between the wing patterns we see in nature and the patterns of genes expressed during their development.”

In the study, variants of a gene called cortex were associated with independently evolved wing patterns in three different butterfly mimics. Unlike other genes that simply turn on or off a color switch in wing cells, the scientists found that the cortex gene is expressed in different color regions of the developing wing tissues at different stages of the butterflies' growth from larva to pupa to adult.

One of the unique features of butterfly and moth wings is that they are covered in tiny scales that look like roof shingles. Nadeau, now a research fellow at the University of Sheffield, said, “It seems likely that cortex took on a role in wing patterning in the ancestor of all butterflies and moths when wings first started to be covered in scales.”

In an independent study published in the same issue of Nature, scientists found that cortex is also involved in expressing all-black, “sooty” wings in peppered moths, a famous adaptation to pollution observed during the Industrial Revolution in England. Since variations in cortex seem to confer different survival advantages to an insect, it can be an important site for rapid evolution as populations preserve the gene variants in their local habitats.

McMillan noted that it took 10 years to zero in on the cortex gene as a factor influencing Heliconius wing variation. Now that the gene has been located, scientists can target it using new technologies like the CRISPR gene-editing tool. Doing so will help them answer bigger questions, he said, adding, “The great challenge of this century is to understand how a rather simple genetic code generates the extraordinary diversity on our planet.”

This work builds on previous studies conducted on passionvine butterflies, including a full sequencing of the genome of H. melpomene, published in Nature in 2012. Researchers involved in this study worked on butterflies bred at the Smithsonian insectaries in Gamboa, Panama. The Smithsonian Tropical Research Institute will open the Gamboa Terrestrial Science Laboratory later this year to expand opportunities for related research and collaboration.

The Smithsonian Tropical Research Institute, headquartered in Panama City, Panama, is a part of the Smithsonian Institution. The Institute furthers the understanding of tropical nature and its importance to human welfare, trains students to conduct research in the tropics and promotes conservation by increasing public awareness of the beauty and importance of tropical ecosystems.