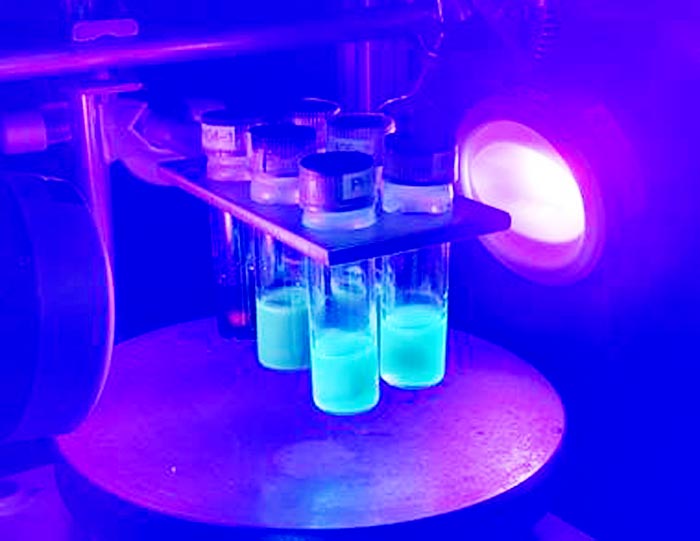 As biocatalysts, enzymes manage the metabolism of all living things. They do this extremely precisely, because even a single incorrectly converted substance could have fatal consequences for the organism. Young researchers from the Leibniz Science Campus ComBioCat are using this selective approach of enzymes and proteins in general to develop catalysts of the future: so-called artificial metalloenzymes. In the future, combinations of bio- and chemical catalysts will be used to design complex molecules, e.g. for pharmaceuticals, in a targeted and reliable manner.

The Best of Two Worlds

At the Leibniz Institute for Catalysis in Rostock, LIKAT, doctoral student Paul Hünemörder is currently in the process of linking a copper catalyst with an enzyme or protein as part of the ScienceCampus ComBioCat. The new catalyst is intended to combine “the best of both worlds,” so to speak, he explains. “Chemical catalysts work quickly and produce high yields, but unfortunately they also produce undesirable byproducts in the process.” That doesn’t happen to biomolecules, he says, because they are “highly selective.”

The development of metalloenzymes is a new field of research in chemistry. At LIKAT, work is underway in the research group of Esteban Mejìa, doctoral supervisor of Paul Hünemörder. “The trick is to find connection points at the molecular level where protein and metal can be linked,” explains Esteban Mejìa. No artificial metalloenzymes are yet in industrial use. According to Mejìa and Hünemörder, they have so far also failed because “the proteins have to be modified, i.e. genetically modified, for this purpose.” This makes them too expensive for widespread use.

On the chemical side, Paul Hünemörder opted for copper as the reactive center. The search for a suitable enzyme was the responsibility of biochemists at the University of Greifswald. They chose a protein called Lactococcus Multidrug Resistance Regulator, or LmrR for short. As a protein, it causes antibiotic resistance in lactic acid bacteria. Its advantage is that it can be used as it occurs in nature and does not need to be genetically modified.

Proteins achieve their effect primarily through their complex folding, their protein structure. In the case of LmrR, this creates a flat pocket, “a kind of slit,” as Paul Hünemörder says. This gave him the idea of sinking the synthetic part of the catalyst, each with a copper atom in the center, into this slot like a coin and connecting it to the protein in this way.

Corset for the Copper Atom

The prerequisite is a kind of corset for the copper atom, a catalyst framework, or ligand in technical jargon. According to Paul Hünemörder, the search for a suitable substance proved to be quite difficult. The only suitable substance was terpyridine, a so-called pincer ligand, which is so called because its shape allows it to pincer the catalyst.

“But the most important thing is that this ligand gives the copper system a very flat structure,” says Paul Hünemörder. “Which makes the catalyst fit perfectly into the ‘slot’ of the enzyme.” Based on initial tests, it seems to work, too. In the future, the metalloenzyme, which in this case is strictly speaking a “metalloprotein,” will convert so-called cyclic alkenes into precursors and intermediates for pharmaceuticals. What advantage does it bring there?

In terms of structure, cyclic alkenes often exist left-handed and right-handed, imaginable as image and mirror image. In nature, enzymes with their highly precise catalytic action ensure that only one variant, the “true” one, is produced. In a chemical synthesis, on the other hand, both variants can be produced. Chemically, they are completely identical, but in their physiological effects they sometimes differ dramatically.

In the 1950s, the painkiller thalidomide caused severe malformations in unborn children because it caused the formation of a mirror-image molecular variant in the organism of the pregnant woman. Industrially, therefore, such end products sometimes have to be separated at great expense so that the desired molecular variant can be used.

This is precisely what the use of an artificial metalloenzyme would eliminate. The aim of the work in Rostock and Greifswald is to ensure that the selective mode of operation of the protein LmrR produces only the desired form of intermediate products. Chemists therefore refer to this reaction as asymmetric.

The copper center in the catalyst now does its job “quickly and reliably,” as Paul Hünemörder and his student research group were able to demonstrate in the laboratory. Now the challenge is to prove that the protein part of the new catalyst also works, i.e. that it recognizes the “handedness” of the starting materials and only allows the “correct” variant to react. Paul Hünemörder expects a result in the fall.

The researchers are convinced that artificial metalloenzymes will give the chemical industry a decisive advantage in the future. And the work is also a theoretical gain. In analyses of the reaction mechanism, the young chemists identified an intermediate that turned out to be essential for the chemical process but had not previously played a role in the technical literature. The findings may help to transfer the reaction principle to other substance classes.