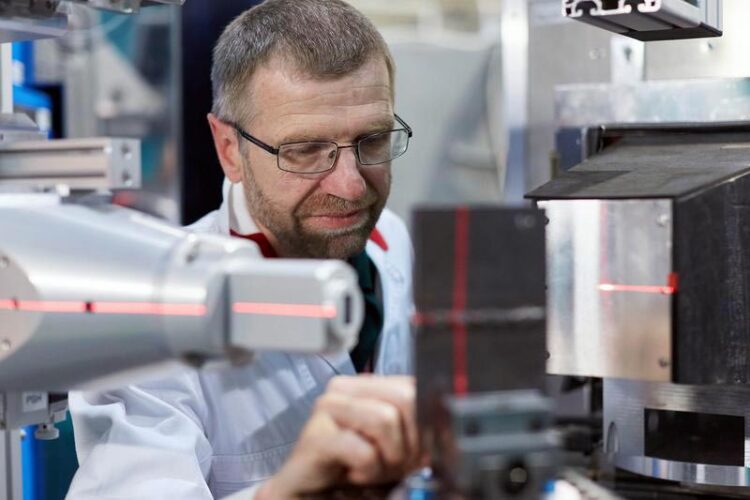 The existence of carbonic acid has long been the subject of debate: theoretically real, but practically impossible to detect. That is because the compound decomposes at the Earth’s surface. A German-Chinese team of researchers working at the FRM II Research Neutron Source at the Technical University of Munich (TUM) has now made the crystalline structure of carbonic acid molecules visible for the first time. Credit: Bernhard Ludewig / TUM

The existence of carbonic acid has long been the subject of debate: theoretically real, but practically impossible to detect. That is because the compound decomposes at the Earth’s surface.

A German-Chinese team of researchers working at the FRM II Research Neutron Source at the Technical University of Munich (TUM) has now made the crystalline structure of carbonic acid molecules visible for the first time.

Everyone believes that they know it, but it has remained one of the biggest secrets in chemistry: carbonic acid. Until now, nobody had ever seen the molecular structure of the compound made up of hydrogen, oxygen and carbon with the chemical formula H2CO3. The compound breaks down rapidly – at least at the Earth’s surface – into water and carbon dioxide or reacts to form hydrogen carbonate, a substance that also breaks down. It is what gives the fizz to mineral water and champagne. “Because people don’t believe in what they can’t see, chemistry books generally claim that carbonic acid does not exist or at least that it cannot be isolated with absolute certainty,” says Prof. Richard Dronskowski, the director of the institute of Inorganic Chemistry at RWTH Aachen.

With his team at the RWTH and the Hoffmann Institute for Advanced Materials (HIAM) in Shenzhen, China, he has now succeeded in producing crystalline carbonic acid and analyzing its structure for the first time. So it is time to rewrite the textbooks.

The researchers took eight years to prove the existence of the compound. “Our computer-based calculations initially showed that we would have to create temperatures of minus 100°C combined with a pressure of around 20,000 atmospheres for carbonic acid crystals to be formed from water and carbon dioxide. So we had to design and build an apparatus that could withstand these extreme conditions,” says Dronskowski. The walls of the measurement cell, which is no bigger than a perfume bottle, consist of a specially produced alloy. A diamond window allows researchers to see inside. In this cell, a mixture of frozen water and carbon dioxide dry ice is subjected to pressure with an anvil. Under these extreme conditions, crystals actually formed.

To learn more about the composition and structure of the crystals, the team took the measurement cell to the FRM II in Munich: “For our investigations, we needed neutron beams,” recalls Dronskowski. “X-rays interact with the electrons in the atoms. But neutrons interact with the nuclei. As a result, they can be used to make even very light atoms visible, such as hydrogen, which contains only a single electron. That was essential for us because our crystals contain hydrogen. We had to know where the hydrogen atoms are located in the molecule.”

To use neutron beams to investigate the atomic structure of a crystal, extremely sensitive measurement instruments are needed such as the STRESS-SPEC diffractometer. It was developed to measure the displacement effects of stresses on the crystal lattice. For the measurement, a monochromator is used to select a specific wavelength from the neutron beam emitted by the FRM II research reactor. This monochromatic beam can be aimed using special slits to focus it entirely on the interior of the measurement cell, explains TUM researcher and FRM II group leader Dr. Michael Hofmann: “This enables us to study very small sample volumes at an extremely high resolution. For the analysis of the sample from Aachen, which had a volume of just a few cubic millimeters, it was ideal.” When the monochromaticized neutron beam strikes a crystal, it is deflected through the interaction with the atoms. This produces a diffraction pattern from which the structure of the crystal lattice can be deduced – at least theoretically.

“In practical terms, the analysis of the measurement data was a real challenge,” says Dronskowski. The researchers took more than two years to identify thousands of structural possibilities with their algorithms and check them against the experimental results. With this approach, they ultimately succeeded in identifying the structure of the crystals that formed in the interior of the measurement cell: They indeed consist of H2CO3 molecules linked by hydrogen bonds, forming a low-symmetry “monocline” structure.

“Our work was primarily fundamental research: chemists just need to know this – they can’t help themselves. But now, where we know the conditions under which carbonic acid forms, we can imagine practical applications,” says Dronskowski. For example, cosmologists who detect traces of carbonic acid on distant planets or moons will be able to draw conclusions on the conditions there. The results might also be interesting for geoengineering: For example, it is now possible to calculate when carbonic acid crystals will form when carbon dioxide is placed under high pressure under wet conditions below ground.

The project received funding from the German Research Foundation (DFG) within the framework of the Excellence Initiative of the German federal government and states.