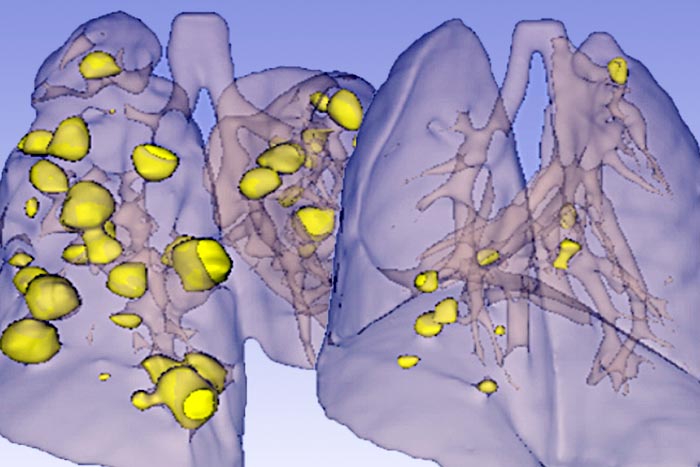 Tumors (yellow) pervade the lungs of mice genetically prone to small cell lung cancer (left) on this computed tomography scan. Researchers at Washington University School of Medicine in St. Louis and colleagues have found that treating such mice with a double-barreled approach — a chemotherapy drug plus blocking resistance — makes the tumors virtually disappear (right). The findings open up a pathway to better therapies for one of the least treatable forms of cancer.
Credit: Simone Hausmann and Pawel Mazur

May lead to better treatments for deadliest form of lung cancer.

An experimental combination of two drugs halts the progression of small cell lung cancer, the deadliest form of lung cancer, according to a study in mice from researchers at Washington University School of Medicine in St. Louis, Grenoble Alpes University in Grenoble, France, and The University of Texas MD Anderson Cancer Center in Houston.

One of the drugs, cyclophosphamide, is an outdated chemotherapy drug once used to treat small cell lung cancer. It was displaced in favor of platinum-based drugs in the 1980s. Both kinds of drugs work at first but falter after a few months as the cancer develops resistance. Platinum-based drugs became the standard of care mainly because they cause lesser side effects, but they have not substantially improved prognosis. Today, the typical patient survives less than a year and a half after diagnosis.

In this study, however, researchers showed that small cell lung cancer cells resist cyclophosphamide by activating a specific repair process, and demonstrated that throwing a wrench into the repair process makes the drug much more effective, at least in mice. The findings, available online in Cancer Discovery, suggest a pathway to better therapies for one of the least treatable forms of cancer.

“Small cell lung cancer has one treatment option — platinum-based chemotherapy — and that adds maybe two to six months of life,” said co-senior author Nima Mosammaparast, MD, PhD, an associate professor of pathology & immunology and of medicine at Washington University, and a researcher at Siteman Cancer Centerat Barnes-Jewish Hospital and Washington University School of Medicine. “The problem is that these tumors respond to treatment initially, but then they come back. This has not changed for 30 years. These tumors are just massively resistant to just about everything. So what this study shows is that we can actually combine a new target with an old drug to reduce resistance and potentially make the treatment much better and give these patients a much better chance.”

The study came together fortuitously. Co-senior author Nicolas Reynoird, PhD, a professor at Grenoble Alpes University, studies how internal signaling within cells – and deregulation of such signaling – can lead to cancer progression and drug resistance. A few years ago, his team discovered that a protein called RNF113A may play a role in small cell lung cancer, but the researchers could not determine what the protein does. Meanwhile, Mosammaparast was studying how cells repair injured DNA. In 2017, he published a paper in the journal Nature describing how cancer cells repair a kind of DNA damage known as alkylation damage, the kind caused by cyclophosphamide. The paper noted that RNF113A plays a role in the process. Reynoird essentially cold-called Mosammaparast, and the two teamed up — along with co-senior author Pawel K. Mazur, PhD, an associate professor of experimental radiation oncology at MD Anderson and a longstanding collaborator of Reynoird’s — to investigate how small cell lung cancer cells resist alkylation damage, and whether it’s possible to magnify the effects of alkylating chemotherapy drugs such as cyclophosphamide by interfering with that resistance.

The team discovered that RNF113A is regulated by a protein called SMYD3 that is highly expressed in small cell lung cancer and some other cancers. High levels of SMYD3 are associated with more invasive disease, increased resistance to alkylating chemotherapy and worse prognosis. Healthy lung tissue has very little SMYD3, which led the researchers to think that knocking it down might target cancerous cells while sparing healthy ones.

So they tried it. The researchers created mouse models of human disease by grafting cancerous cells from two people with small cell lung cancer onto separate groups of mice. One set of cells came from a patient who had not yet been treated, so the cells had not had a chance to develop resistance. The other came from a patient who had been treated with and become resistant to standard platinum-based therapy.

All of the mice grew tumors. When the tumors were big enough, the researchers treated the mice with an inhibitor of SMYD3, cyclophosphamide, both or an inactive solution. Inhibiting SMYD3 alone modestly slowed down the growth of the tumors. Cyclophosphamide initially halted the growth of tumors from both patients, but the tumors started to grow again after about two weeks, indicating that they had developed resistance. However, the combination of the two drugs stopped the tumors in their tracks. They did not restart growing for the duration of the experiment.

“We’re talking to a number of other groups about starting a phase 1 clinical trial as soon as possible,” Mosammaparast said. “One of the challenges we will face is convincing doctors to go back to an old drug. But the nice thing about this strategy is that it may work where current therapies have failed. This treatment worked just as well against the tumor from the patient who had already relapsed on platinum-based therapy as it did against the untreated patient. People with small cell lung cancer are in desperate need of better treatments, and I’m very excited about the possibilities here.”