How drought-tolerant grasses came to be 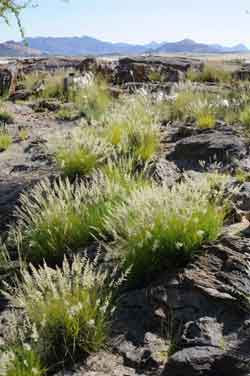 If you eat bread stuffing or grain-fed turkey this Thanksgiving, give thanks to the grasses — a family of plants that includes wheat, oats, corn and rice. Some grasses, such as corn and sugar cane, have evolved a unique way of harvesting energy from the sun that's more efficient in hot, arid conditions. A new grass family tree reveals how this mode of photosynthesis came to be.

From the grasslands of North America, to the pampas of South America, to the steppes of Eurasia and the savannas of the tropics, the grass family contains more than 10,000 species, including the world's three most important crops: wheat, rice and corn. We rely on grasses for sugar, liquor, bread, and livestock fodder.

Like all plants, grasses harvest energy from sunlight by means of photosynthesis. But grasses use two strategies that differ in how they take up carbon dioxide from the air and convert it into the starches and sugars vital to plant growth. The majority of grasses use a mode of photosynthesis called the C3 pathway, but many species — especially those in hot, tropical climates — use an alternate mode of photosynthesis known as C4. In hot, arid environments, C4 grasses such as maize, sugar cane, sorghum and millet have a leg up over C3 plants because they use water more efficiently.

An international team of researchers wanted to figure out how many times, and when, the C4 strategy came to be. To find out, they used DNA sequence data from three chloroplast genes to reconstruct the grass family tree. The resulting phylogeny represents 531 species, including 93 species for which DNA sequence data was previously unavailable.

“By working collaboratively across many labs, from the US to Argentina to Ireland to Switzerland — with some people providing new plant material, and others doing the DNA sequencing — we were able to get a lot done in a very short amount of time,” said co-author Erika Edwards of Brown University.

The results suggest that the C4 pathway has evolved in the grasses more than 20 separate times within the last 30 or so million years, Edwards said.

What's most surprising, she added, is that C4 evolution seems to be a one-way street – i.e., once the pathway evolves, there's no turning back. “We can't say whether it is evolutionarily 'impossible', or whether there simply hasn't been a good reason to do it, but it seems increasingly unlikely that any C4 grasses have ever reverted to the C3 condition,” Edwards said.

“The new tree will be extremely useful for anyone who works on grasses,” she added.

For example, scientists are currently trying to engineer the C4 photosynthetic pathway into C3 crops like rice to produce more stress-tolerant plants. By helping researchers identify pairs of closely related C3 and C4 species, the evolutionary relationships revealed in this study could help pinpoint the genetic changes necessary to do that.

“The next challenge is getting these species into cultivation and studying them closely, and ideally, sequencing their genomes,” Edwards said.

The results will be published this week in the journal New Phytologist.

The National Evolutionary Synthesis Center (NESCent) is a nonprofit science center dedicated to cross-disciplinary research in evolution. Funded by the National Science Foundation, NESCent is jointly operated by Duke University, The University of North Carolina at Chapel Hill, and North Carolina State University. For more information about research and training opportunities at NESCent, visit www.nescent.org.