Drinking Water from the Sea 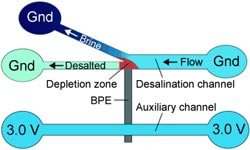 A new method for the desalination of sea water has been reported by a team of American and German researchers in the journal Angewandte Chemie. In contrast to conventional methods, this technique consumes little energy and is very simple. This electrochemically mediated seawater desalination is based on a system of microchannels and a bipolar electrode.

The United Nations estimates that one-third of the global population already lives in water-stressed areas; this figure is expected to double by 2025. Salt water, on the other hand, is not in short supply. A seemingly obvious solution would be to desalinate seawater; however, this is not so easy. Processes like vaporization and subsequent condensation of the water require enormous amounts of energy. Reverse osmosis additionally requires expensive, delicate membranes that are easily fouled, and the water must undergo complex pre-treatment steps.

Developed with the support of the U.S. Department of Energy by Richard M. Crooks (The University of Texas at Austin), Prof. Ulrich Tallarek (University of Marburg, Germany), and their colleagues, the new electrochemical process works without membranes or large amounts of energy. The researchers force the water through a system of two microchannels that are about 22 µm wide, an auxiliary channel and a branched working channel, flowing on to the outlets.

The structure of the channel system is critical: The electrode juts into the branch point of the working channel. Because of the voltage, some of the negatively charged chloride ions in the seawater are oxidized to neutral chlorine at one end of the bipolar electrode. In the narrow channel system, this creates a zone that has a lower number of negatively charged ions, which results in an electric field gradient that directs the positively charged ions in the seawater into the branching channel.

Physics requires the electroneutrality within the microchannels to be maintained, so the anions follow the positive ions into the branched channel. The water flowing through the branch is thus enriched with ions, while the water continuing through the main working channel is partially desalinated.

The amount of energy required for this new technique is so low that the system can operate with a simple battery. In contrast to reverse osmosis, it is only necessary to remove sand and sediment from the seawater. No further treatment, disinfection, or addition of chemicals is needed. A simple parallel arrangement of many microchannel systems should allow for an increase in water throughput.
About the Author
Dr. Richard M. Crooks is the Robert A. Welch Chair in Materials Chemistry at The University of Texas at Austin. His research interests in electrochemistry, microfluidics, biosensing, and catalysis.
Author: Richard M. Crooks, The University of Texas at Austin (USA), http://rcrooks.cm.utexas.edu/research/
Title: Electrochemically Mediated Seawater Desalination
Angewandte Chemie International Edition, Permalink to the article: http://dx.doi.org/10.1002/anie.201302577