Draft sequence of the rye genome 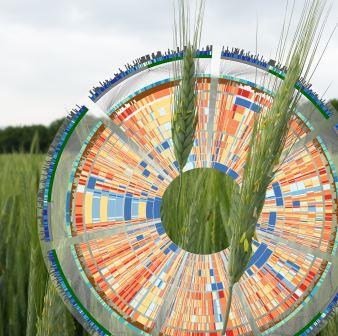 A team of German plant researchers from the Technical University of Munich (TUM) and from the Leibniz-Institute of Plant Genetics and Crop Plant Research in Gatersleben reports on a whole-genome draft sequence of rye.

Cereal rye (Secale cereale L.) is a diploid Triticeae species closely related to bread wheat (Triticum aestivum L.) and barley (Hordeum vulgare L.) and is one of the parents of the man-made cereal Triticale. Due to its superior winter hardiness, rye is especially used in Central and Eastern Europe for food, feed and bioenergy.

Among all diploid Triticeae, rye has the largest and a highly repetitive genome, this means it has a double chromosome set. “For a long time comprehensive whole-genome sequence information of rye has been missing, whereas draft genome sequences of its sister species barley and wheat became available recently”, explains Eva Bauer, scientist at the Chair of Plant Breeding of the Technical University of Munich and main author.

“This gap has now been closed by our publication in The Plant Journal. Through comprehensive resequencing we investigated the exceptional genomic diversity of rye and developed a high-density genotyping array.”

Uwe Scholz, head of the research group Bioinformatics at the Leibniz-Institute of Plant Genetics and Crop Plant research adds: “This genomic resource is an indispensable tool for understanding the biology and evolution of major Triticeae species through comparative genomic approaches and for relating this knowledge to phenotypic traits.“

Rye genome is important for breeding better wheat or barley

Rye is an important model to elucidate the genetic and functional basis of traits that are also relevant for the genetic improvement of wheat and barley. It excels by an exceptional frost tolerance and outyields wheat and barley on poor and medium soils and under drought stress conditions. Rye translocations are present in many wheat varieties grown worldwide, and contribute to abiotic and biotic stress tolerance. Thus, the availability of rye whole-genome sequences will facilitate the elucidation of genes and molecular mechanisms underlying important agronomic traits that are useful for the improvement of related Triticeae species.

The study by IPK and TUM in cooperation with the University of Hohenheim, Helmholtz Zentrum München, the Julius Kühn Institute and KWS Lochow GmbH was funded by the BMBF.