Home / Life Sciences / Dog-human cooperation is based on social skills of wolves
20.01.2015

Dog-human cooperation is based on social skills of wolves 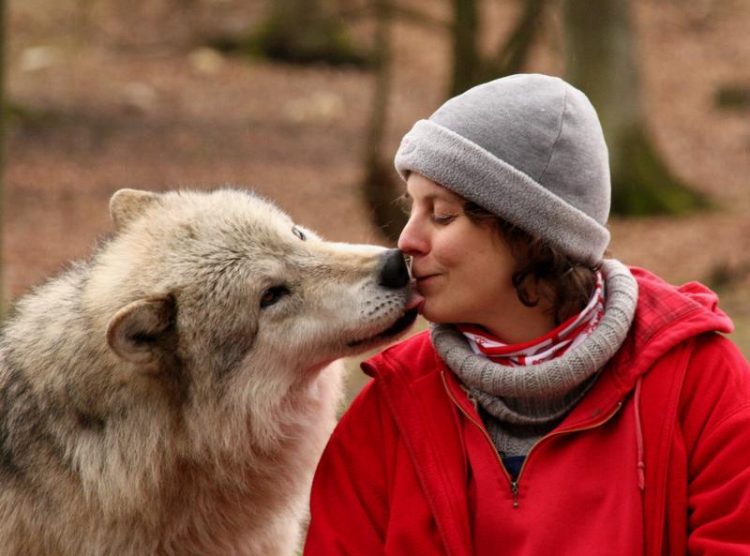 Wolves are at least as tolerant and socially attentive as dogs. Photo: Wolf Science Center

The origins of this dog-human relationship were subject of a study by behavioural scientists from the Messerli Research Institute at the Vetmeduni Vienna and the Wolf Science Center. They showed that the ancestors of dogs, the wolves, are at least as attentive to members of their species and to humans as dogs are.

This social skill did not emerge during domestication, as has been suggested previously, but was already present in wolves. The researchers have published a summary of their results and present their new theory in the journal Frontiers in Psychology.

Commonly accepted domestication hypotheses suggest: “Dogs have become tolerant and attentive as a result of humans actively selecting for these skills during the domestication process in order to make dogs cooperative partners.”

Friederike Range and Zsófia Virányi from the Unit of Comparative Cognition at the Messerli Research Institute question the validity of this view and have developed the “Canine Cooperation Hypothesis”. Their hypothesis states that since wolves already are tolerant, attentive and cooperative, the relationship of wolves to their pack mates could have provided the basis for today’s human-dog relationship. An additional selection, at least for social attentiveness and tolerance, was not necessary during canine domestication.

The researchers believe that wolves are not less socially attentive than dogs. Dogs however cooperate more easily with humans because they more readily accept people as social partners and more easily lose their fear of humans. To test their hypothesis, Range and Virányi examined the social attentiveness and tolerance of wolves and dogs within their packs and toward humans.

Wolf performance in tests at least as good as dogs

Various behavioural tests showed that wolves and dogs have quite similar social skills. Among other things, the researchers tested how well wolves and dogs can find food that has been hidden by a conspecific or by a human. Both wolves and dogs used information provided by a human to find the hidden food.

In another study, they showed that wolves followed the gaze of humans. To solve the task, the animals may need to be capable of making a mental representation of the “looker’s” perspective. Wolves can do this quite well.

Another experiment gave dogs and wolves the chance to observe conspecifics as they opened a box. When it was the observer’s turn to do the same, the wolves proved to be the better imitators, successfully opening the box more often than dogs. “Overall, the tests showed that wolves are very attentive to humans and to each other. Hypotheses which claim that wolves have limited social skills in this respect in comparison to dogs are therefore incorrect,” Range points out.

Testing dogs and wolves in packs

At the Wolf Science Center in Ernstbrunn in Lower Austria, Range and Virányi investigated the social behaviour of dogs and wolves that grew up with members of their species and with humans. “The animals are socialized both with conspecifics and with humans. To be able to compare the behaviour of dogs and wolves and to investigate the effects of domestication, it is important that the animals live in the same conditions,” Virányi explains.

The University of Veterinary Medicine, Vienna in Austria is one of the leading academic and research institutions in the field of Veterinary Sciences in Europe. About 1,300 employees and 2,300 students work on the campus in the north of Vienna which also houses five university clinics and various research sites. Outside of Vienna the university operates Teaching and Research Farms. http://www.vetmeduni.ac.at