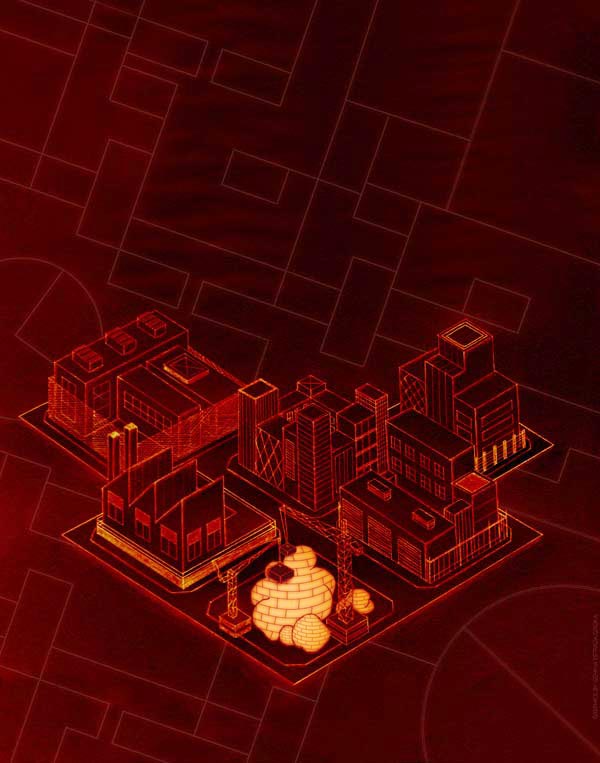 Construction of an organelle in a living cell for protein biosynthesis ill./©: Gemma Estrada Girona

For example, scientists might incorporate fluorescent building blocks into proteins via the organelle that allow a glimpse inside the cell using imaging methods.

Organelles are compartments in cells that, like the nucleus or the mitochondria, perform specific functions. The Lemke group has now created a new compartment in which special proteins can be synthesized.

“Figuratively speaking, we look for a corner in the cell where we build our house and then bring in some of the ribosomes that are present in the cell,” explained Professor Edward Lemke. The biosynthesis of proteins takes place at the ribosomes. Using the genetic code, the messenger RNA (mRNA) is translated into the sequence of amino acids for the protein to be newly formed.

Translation is a very complex process that cannot easily be contained in an organelle surrounded by a membrane. Therefore, Lemke's team drew inspiration for creating the designer organelle from phase separation, i.e., the process responsible for the formation of membraneless organelles in vivo, such as nucleoli or stress granules.

Cells use phase separation to concentrate specific proteins and RNAs locally as well as to build new membraneless compartments. “Our membraneless organelle is virtually an open reaction center,” said Lemke.

This allows protein biosynthesis to occur in a well-defined place, which is important for working with synthetic amino acids. Researchers have already been able to create a new protein with the help of a synthetic, non-natural amino acid. However, incorporating the protein nonspecifically throughout the cell causes high cellular stress and the cell may be severely affected. The new orthogonal translation method avoids this problem.

“Our organelle can make proteins by using synthetic non-canonical amino acids. Currently, we know of more than 300 different non-canonical amino acids – compared to 20 naturally occurring. This means that we are no longer restricted to the latter ones,” said Gemma Estrada Girona, who together with Christopher Reinkemeier is first author of the Science paper.

This translates the RNA differently within the organelle than in the rest of the cell. “We have taken nature as our model, especially the membraneless nucleolus, which is involved in the synthesis of RNA in the nucleus,” explained Lemke. “We were surprised that we can actually build such a complicated structure and function with just a few steps.”

The new concept may serve as a platform for the design of other organelles and the building of semisynthetic cells and organisms. “Our tool can be used to engineer translation and maybe other cellular processes like transcription and post-translational modifications, too. This might even allow us to engineer new types of organelles that extend the functional repertoire of natural complex living systems,” said Christopher Reinkemeier.

Designer organelles combine the fields of biology and chemistry to achieve a completely new functionality. One field of application is the aforementioned fluorescence method in imaging, another could be in the production of antibodies for therapeutic purposes. First of all, Lemke and his group aim to engineer minimal designer organelles to minimize the impact on the physiology of the healthy organism.

Video:
https://youtu.be/dCb07aM9Itk
Synthetic organelle inside cells: The video shows a 3D rendering of immunofluorescence images of a synthetic organelle, which is based on phase separation and motor proteins. Nuclei of transfected cells are show in green, ribosomes in cyan, microtubules in yellow, and the orthogonal tRNA synthetase in magenta. The video shows that ribosomes as well as microtubules can be found inside the organelle.
©: Christopher Reinkemeier

http://www.uni-mainz.de/bilder_presse/10_imp_biophysik_translation.jpg
The genetic code is made up of three-letter sequences called codons. Each one codes for an amino acid, except for three 'stop' codons, which signal that an amino acid chain is complete. The Lemke group was able to selectively reprogram one of these stop codons so that it coded for a new amino acid, which does not belong to the 20 that occur naturally in living organisms.
ill./©: Aleks Krolik, EMBL