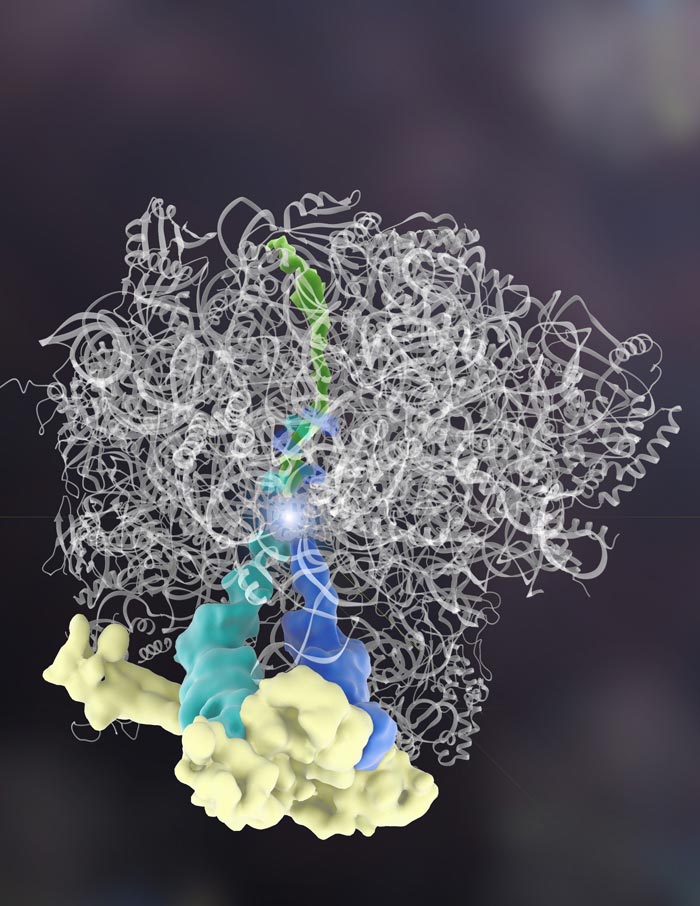 Janet Iwasa, Ph.D., University of Utah Caught in the act: Rqc2 protein adds amino acids to a new protein A new finding goes against dogma, showing for the first time that the building blocks of a protein, called amino acids, can be assembled by another protein, and without genetic instructions. The Rqc2 protein (yellow) binds tRNAs (dark blue, teal) which add amino acids (bright spot in middle) to a partially made protein (green). The complex binds the ribosome (white).

Results from a study published on Jan. 2 in Science defy textbook science, showing for the first time that the building blocks of a protein, called amino acids, can be assembled without blueprints – DNA and an intermediate template called messenger RNA (mRNA). A team of researchers has observed a case in which another protein specifies which amino acids are added.

“This surprising discovery reflects how incomplete our understanding of biology is,” says first author Peter Shen, Ph.D., a postdoctoral fellow in biochemistry at the University of Utah. “Nature is capable of more than we realize.”

To put the new finding into perspective, it might help to think of the cell as a well-run factory. Ribosomes are machines on a protein assembly line, linking together amino acids in an order specified by the genetic code. When something goes wrong, the ribosome can stall, and a quality control crew is summoned to the site. To clean up the mess, the ribosome is disassembled, the blueprint is discarded, and the partly made protein is recycled.

Yet this study reveals a surprising role for one member of the quality control team, a protein conserved from yeast to man named Rqc2. Before the incomplete protein is recycled, Rqc2 prompts the ribosomes to add just two amino acids (of 20 total) – alanine and threonine – over and over, and in any order. Think of an auto assembly line that keeps going despite having lost its instructions. It picks up what it can and slaps it on: horn-wheel-wheel-horn-wheel-wheel-wheel-wheel-horn.

“In this case, we have a protein, Rqc2, playing a role similar to that of mRNA,” says Adam Frost, M.D., Ph.D., assistant professor at University of California, San Francisco (UCSF) and adjunct professor of biochemistry at the University of Utah. He shares senior authorship with Jonathan Weissman, Ph.D., a Howard Hughes Medical Institute investigator at UCSF, and Onn Brandman, Ph.D., at Stanford University. “I love this story because it blurs the lines of what we thought proteins could do.”

Like a half-made car with extra horns and wheels tacked to one end, a truncated protein with an apparently random sequence of alanines and threonines looks strange, and probably doesn’t work normally. But the nonsensical sequence likely serves specific purposes. The code could signal that the partial protein must be destroyed, or it could be part of a test to see whether the ribosome is working properly. Evidence suggests that either or both of these processes could be faulty in neurodegenerative diseases such as Alzheimer’s, Amyotrophic lateral sclerosis (ALS), or Huntington’s.

“There are many interesting implications of this work and none of them would have been possible if we didn’t follow our curiosity,” says Brandman. “The primary driver of discovery has been exploring what you see, and that’s what we did. There will never be a substitute for that.”

The scientists first considered the unusual phenomenon when they saw evidence of it with their own eyes. They fine-tuned a technique called cryo-electron microscopy to flash freeze, and then visualize, the quality control machinery in action. “We caught Rqc2 in the act,” says Frost. “But the idea was so far-fetched. The onus was on us to prove it.”

It took extensive biochemical analysis to validate their hypothesis. New RNA sequencing techniques showed that the Rqc2/ribosome complex had the potential to add amino acids to stalled proteins because it also bound tRNAs, structures that bring amino acids to the protein assembly line. The specific tRNAs they saw only carry the amino acids alanine and threonine. The clincher came when they determined that the stalled proteins had extensive chains of alanines and threonines added to them.

“Our job now is to determine when and where this process happens, and what happens when it fails,” says Frost.

The research was supported by grants from the Searle Scholars program, the National Institutes of Health, the Howard Hughes Medical Institute, Stanford University, and the University of Utah.