Home / Life Sciences / Defense against viruses or autoimmune disorder? When the phosphate decides …
08.06.2018

Defense against viruses or autoimmune disorder? When the phosphate decides … 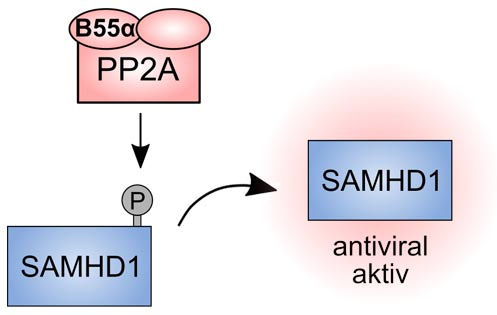 Schematic representation of the dephosphorylation of the restriction factor SAMHD1. Source: PEI

Restriction factors inhibit viral infection and proliferation (replication) in body cells. SAMHD1 (sterile alpha motif and histidine-aspartate (HD)-domain-containing protein 1) is such a restriction factor. It was identified as an important protein acting antivirally against HIV-1 (human immunodeficiency virus 1), but it was also found to have other functions.

Thus, it was shown that mutations in the SAMHD1 gene go hand in hand with the loss of its function and may that way cause cancer and autoimmune disorders. Accordingly, there is a major interest in understanding the mode of action and regulation of this molecule better.

SAMHD1 regulates the amount of important building blocks for the formation of cellular DNA available in cells, the dNTPs (desoxynucleotide triphosphates). By attaching a phosphate group (phosphorylation) to the amino acid at positon T592, SAMHD1 becomes able to influence DNA sections that “stagnate“ during DNA duplication in such a way that the DNA replication (duplication) can be continued, thus preventing chronic inflammation. In a non-phosphorylated state, on the other hand, SAMHD1 has an antiviral effect.

Dr. Renate König, head of the research group “Cellular aspects of pathogen-host interactions” and her research group at the Paul-Ehrlich-Institut investigated which of the many phosphatases of the cell, which can removephosphate groups based on their enzyme activity, perform exactly this dephosphorylation at amino acid T592 of SAMHD1. It is only after dephosphorylation that SAMHD1 is antivirally active. The research team also studied how this reaction is temporally regulated during the cell cycle.

To do this, the researchers used two complementary proteomics approaches: These are procedures in which protein-related analyses are performed. The researchers studied the cell cycle and the influence of phosphorylation or dephosphorylation processes – as applicable – on the antiviral activity of SAMHD1.

In doing so, they identified the key enzyme which makes the antiviral activity of SAMHD1 possible, i.e. the phosphatase PP2A-B55alpha. This phosphatase obtained its cryptic name thanks to the fact that there are 90 enzyme variants (holoenzymes), but only this variant with the name PP2A-B55alpha which can convey SAMHD1 dephosphorylation and thus enable its antiviral activity. In addition, the researchers succeeded in discovering the time window in the cell cycle in which T592 dephosphorylation occurs, leading to reduced and/ or delayed HIV-1 replication.

While the phosphorylated SAMHD1 variant plays an important role in cell division and contributes to the defense against chronic inflammations, the molecule without this phosphate group is in a position to convey defense against viruses such as HIV or hepatitis virus.

The researchers intend to perform further studies in which they would like to clarify the way in which SAMHD1 provides a defense mechanism against HIV infection.