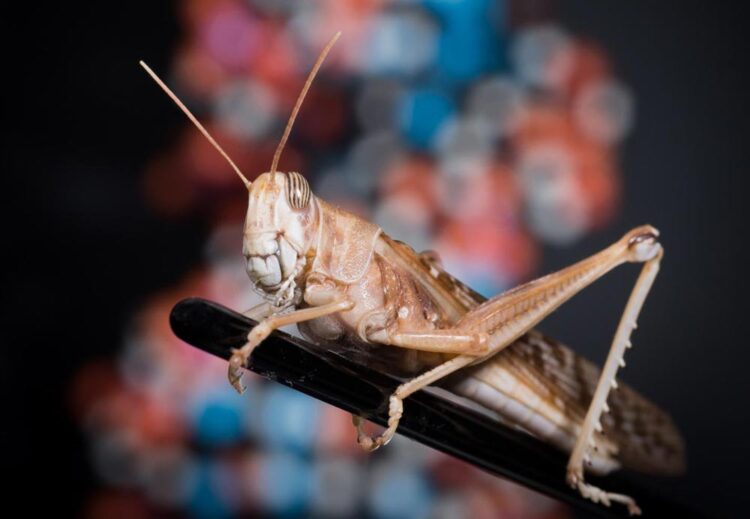 In between swarm outbreaks, desert locusts lead solitary lives that behave much like a harmless grasshopper.
Credit: University of Leicester

A ‘game changing’ study deciphering the genetic material of the desert locust by researchers at the University of Leicester, could help combat the crop-ravaging behaviour of the notorious insect pest which currently exacerbates a hunger crisis across many developing countries.

It is hoped that the study will provide the basis for developing ‘intelligent pesticides’, that act with surgical precision by tapping into locust-specific signals in the nervous system, to either kill or disable their swarming behaviour, without harming other organisms.

The full set of genetic information for the desert locust could have major international implications for countries such as East Africa, the Arabian Peninsula and South-West Asia, which this year have been suffering the most devastating desert locust crises in decades despite wide-spread control operations that are still ongoing.

According to the Food and Agricultural Organisation (FAO), a swarm of locusts can contain around 40 million insects per square kilometre, which each day can eat the same amount of food as 35,000 people. The FAO estimates that 42 million people are currently facing severe food insecurity caused specifically by the desert locust.

Dr Tom Matheson said:”The incredible devastation that these voracious insects can cause to food crops and pastures affects the livelihoods of hundreds of thousands of farmers and exacerbates the risks of starvation for the wider population in already vulnerable regions.

“The desert locust genome provides key information that could be a complete game-changer for the developing world, and a huge economic step forward for countries struggling to feed their populations.

“Tackling locust infestations and controlling swarms will never be easy because of the challenging conditions across the huge areas affected, but with the right information and research at hand, we hope that future approaches can become more effective.”

He added:”If climate change causes locust plagues to become the ‘new normal’, we will need all hands on deck by way of in-depth research and improved technology to help in the fight to control swarms.”

Desert locust swarms are a major economic issue in more than 65 countries, across more than 20 per centof the world’s total land surface. Authorities in affected countries have been carrying out aerial spraying of pesticides, but the scale of the infestation is often beyond local capacity as desert locusts can travel up to 150km (95 miles) in a day, crossing national borders and rugged terrain in regions with little road infrastructure.

While locust swarms are infamous for the great damage they inflict to agriculture, their genetic material (‘genome’) is famed amongst researchers for its enormous size. At more than 8.8 billion base pairs of DNA (8.8 ‘giga-bases’), the desert locust genome is the largest insect genome sequenced to date and over 2.8 times larger than the human genome.

Dr Swidbert Ott added:”We do not yet understand the genetic instructions that make locusts behave so differently from ordinary grasshoppers, and to such damaging effect. Until now, a major stumbling block has been the lack of the desert locust genome sequence that holds the answer to what makes a grasshopper a locust.

“We hope that our data can facilitate the development of novel, more sustainable methods of managing swarm outbreaks. With the information in our research now available, there is a unique opportunity for innovators to create an intelligent pesticide that targets locusts, but not other insects crucial to the ecosystem, such as pollinators.”

For more information or for interviews with the authors, contact Corinne Scotland in the University of Leicester Press Office on 07590403166 or at cjs78@leicester.ac.uk

Images are available on request.

2. Experts worked with an international team of specialists to accomplish the first sequencing of the complete set of genetic instructions (the ‘genome’) of the desert locust.

3. A Desert Locust adult can consume roughly its own weight in fresh food per day: that is about two grams every day. A 1 km² size swarm contains about 40 million locusts, which eat the same amount of food in one day as about 35,000 people, 20 camels or 6 elephants. During quiet periods (known as recessions), solitarious locusts are found in low numbers scattered throughout the deserts of North Africa, the Middle East and Southwest Asia. This arid area is some 16 million km² in size, and includes about 30 countries. It is called the recession area. During a plague, swarms can also invade other countries and a greater amount of land equivalent to about 20% of Earth’s land can be affected (invasion area). More information from the FAO can be found here.

4. In between swarm outbreaks, desert locusts lead solitary lives that behave much like a harmless grasshopper. Locust swarms reflect the remarkable ability of desert locusts to transform from a lone-living ‘solitarious phase’ into a swarming ‘gregarious phase’ that is attracted to other locusts and thus tends to aggregate in even greater numbers. Not only do locusts behave very differently once this transformation has taken place, they also look so different that the two phases were mistaken for separate species until less than 100 years ago! This ability of desert locusts to transform into the swarming phase is encoded in their genes. Under favourable conditions, the population can increase 20-fold every three months.