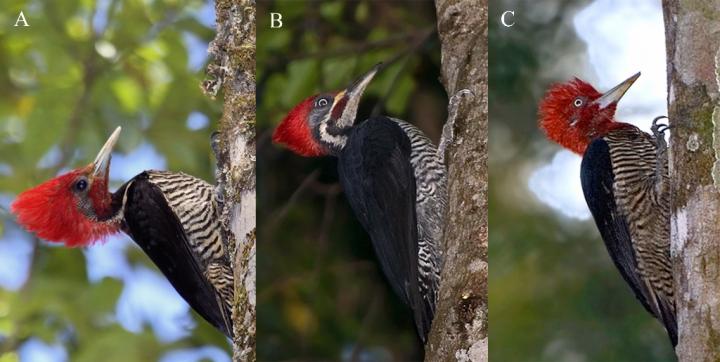 The most familiar type of mimicry typically involves warning or “aposematic” coloration, in which a harmless species apes the color patterns of a dangerous or unappealing one to avoid predators; a famous instance is the Viceroy butterfly, which shares the striking colors of the more noxious Monarch. By contrast, the Helmeted Woodpecker (Dryocopus galeatus) represents an example of a different and less well understood form of mimicry, known as interspecific social dominance mimicry or ISDM.

The shy and little-known species shares the red crest, black back, and barred underside of two larger woodpeckers Dryocopus lineatus and Campephilus robustus, all of which occupy the same habitat and share similar food preferences.

The Helmeted Woodpecker's similarity in appearance makes the larger, more dominant woodpecker species less likely to attack it, due to the costs of aggression between members of the same species. Though they had been previously classified in Dryocopus due to the remarkable similarities in their appearance, genetic analysis by Benz and his colleagues suggests that the Helmeted Woodpecker is actually not closely related to other Dryocopus woodpeckers at all and belongs in a different genus, Celeus. An independent group of researchers using the same data recently reported similar results in a paper published in the Journal of Ornithology.

“Co-author Mark Robbins and I had just finished a phylogenetic study examining species limits and vocalizations in Celeus woodpeckers when Mark, who was attending a meeting in Brazil, had the opportunity to observe a Helmeted Woodpecker at Intervales State Park,” according to Benz.

“Upon hearing the bird vocalize, Mark was stunned that its call sounded nothing like Neotropical Dryocopus, and immediately knew we needed to examine its taxonomic status in the context of our recent Celeus study given that the Helmeted Woodpecker calls were most similar to several other Celeus species.

Upon returning from Brazil, Mark consulted with co-author Kevin Zimmer, who had independently arrived at the same conclusions about the Helmeted Woodpecker belonging with Celeus, based on his behavioral observations spanning 20 years of fieldwork in Brazil.” As Benz puts it, “The Helmeted Woodpecker is basically a typical Celeus in Dryocopus clothing.”

“After several decades working on the discovery of the avian Tree of Life, it is still amazing what we are discovering! Reconstructing the phylogeny of these woodpeckers has corrected a century-old classification mistake, but more interestingly, it has revealed an unexpected new example of avian mimicry,” adds Richard Prum of Yale University, one of the originators of the ISDM hypothesis.

“It has only recently been appreciated that small species may benefit from deceptively mimicking larger species to protect themselves from aggressive attack. This is similar to how a 12-year-old kid walking home from school will look and act tough to try to prevent himself from being harassed by older, bigger kids.”

Relatively little is known about the ecology and natural history of the Helmeted Woodpecker, which is found in Brazil, Paraguay, and Argentina, but it has experienced dramatic population declines and vanished from much of its former range due to deforestation. Hopefully, this new discovery about its evolutionary relationships and visual deception may increase interest in the species, as it provides an opportunity for scientists to further test predictions associated with ISDM. Ultimately, bringing the Helmeted Woodpecker's sneaky strategy into the light may be what saves it from oblivion.

“Phylogenetic relationships of the Helmeted Woodpecker (Dryocopus galeatus): A case of interspecific mimicry?” will be published on September 30, 2015, and will be available at http://www.aoucospubs.org/toc/tauk/132/4; a pre-print version is available at http://dx.doi.org/10.1101/023663.

About the journal: The Auk: Ornithological Advances is a peer-reviewed, international journal of ornithology that began in 1884 as the official publication of the American Ornithologists' Union. In 2009, The Auk was honored as one of the 100 most influential journals of biology and medicine over the past 100 years.