Home / Life Sciences / Culture in humans and apes has the same evolutionary roots
21.10.2011

Culture in humans and apes has the same evolutionary roots 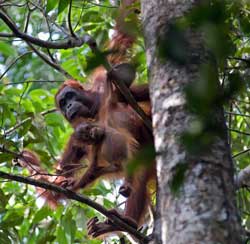 By studying orangutan populations, a team of researchers headed by anthropologist Michael Krützen from the University of Zurich has demonstrated that great apes also have the ability to learn socially and pass them down through a great many generations. The researchers provide the first evidence that culture in humans and great apes has the same evolutionary roots, thus answering the contentious question as to whether variation in behavioral patterns in orangutans are culturally driven, or caused by genetic factors and environmental influences.

In humans, behavioral innovations are usually passed down culturally from one generation to the next through social learning. For many, the existence of culture in humans is the key adaptation that sets us apart from animals. Whether culture is unique to humans or has deeper evolutionary roots, however, remains one of the unsolved questions in science.

About ten years ago, biologists who had been observing great apes in the wild reported a geographic variation of behavior patterns that could only have come about through the cultural transmission of innovations, much like in humans. The observation triggered an intense debate among scientists that is still ongoing. To this day, it is still disputed whether the geographical variation in behavior is culturally driven or the result of genetic factors and environmental influences.

Humans are not the only ones to exhibit culture
Anthropologists from the University of Zurich have now studied whether the geographic variation of behavioral patterns in nine orangutan populations in Sumatra and Borneo can be explained by cultural transmission. “This is the case; the cultural interpretation of the behavioral diversity also holds for orangutans – and in exactly the same way as we would expect for human culture,” explains Michael Krützen, the first author of the study just published in Current Biology. The researchers show that genetic factors or environmental influences cannot explain the behavior patterns in orangutan populations. The ability to learn things socially and pass them on evolved over many generations; not just in humans but also apes. “It looks as if the ability to act culturally is dictated by the long life expectancy of apes and the necessity to be able to adapt to changing environmental conditions,” Krützen adds, concluding that, “Now we know that the roots of human culture go much deeper than previously thought. Human culture is built on a solid foundation that is many millions of years old and is shared with the other great apes.”
Largest dataset for any great ape species
In their study, the researchers used the largest dataset ever compiled for a great ape species. They analyzed over 100,000 hours of behavioral data, created genetic profiles for over 150 wild orangutans and measured ecological differences between the populations using satellite imagery and advanced remote sensing techniques. “The novelty of our study,” says co-author Carel van Schaik, “is that, thanks to the unprecedented size of our dataset, we were the first to gauge the influence genetics and environmental factors have on the different behavioral patterns among the orangutan populations.” When the authors examined the parameters responsible for differences in social structure and behavioral ecology between orangutan populations, environmental influences and, to a lesser degree, genetic factors played an important role, proving that the parameters measured were the right ones. This, in turn, was pivotal in the main question as to whether genetic factors or environmental influences can explain the behavioral patterns in orangutan populations. “That wasn’t the case. As a result, we could prove that a cultural interpretation for behavioral diversity also holds true for orangutans,” van Schaik concludes.
Literature:
Michael Krützen, Erik P. Willems, and Carel P. van Schaik: Culture and Geographic Variation in Orangutan Behaviour, in: Current Biology, Volume 21, Issue 21, first published online: October 20, 2011, doi:10.1016/j.cub.2011.09.01
Contacts:
Dr. Michael Krützen
Anthropological Institute & Museum
University of Zurich
Tel.: +41 635 54 12
Email: michael.kruetzen@aim.uzh.ch
Beat Müller
Media Relations
University of Zurich
Phone: +41 44 634 44 32
E-mail: beat.mueller@kommunikation.uzh.ch