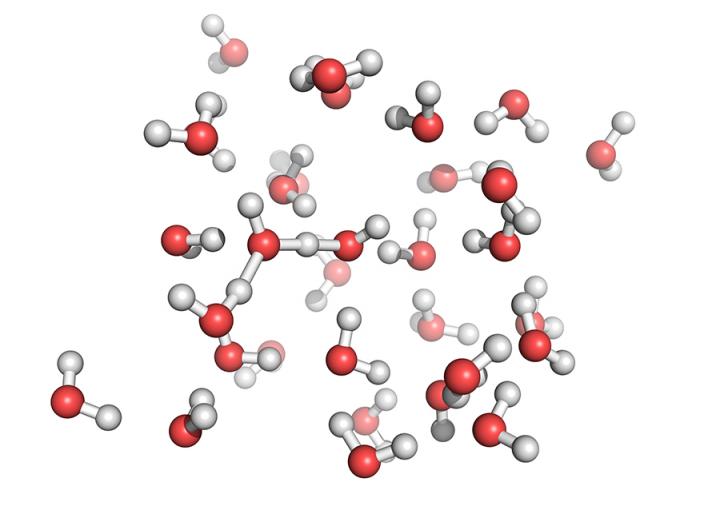 Researchers had to study almost 100,000 simulation images of this type before they were able to identify what triggers the water molecules to split. Lots of computing power went into those simulations. Credit: NTNU Usage Restrictions: With credit and only in association with articles about this research

Chemical reactions take place around us all the time – in the air we breathe, the water we drink, and in the factories that make products we use in everyday life. And those reactions happen way faster than you can imagine.

Given optimal conditions, molecules can react with each other in a quadrillionth of a second.

In order to improve the processes we need to know how different molecules react with each other and what triggers the reactions.

Challenging, even with computer simulations

Computer simulations help make it possible to study what happens during a quadrillionth of a second.

So if the sequence of a chemical reaction is known, or if the triggers that initiate the reaction occur frequently, the steps of the reaction can be studied using standard computer simulation techniques.

But this is often not the case in practice. Molecular reactions frequently behave differently. Optimal conditions are often not present – like with water molecules used in hydrogen production – and this makes reactions challenging to investigate, even with computer simulations.

Until recently, we haven't known what initiates the splitting of water molecules. What we do know is that a water molecule has a life span of ten hours before it splits. Ten hours may not sound like a long time, but compared to the molecular time scale – a quadrillionth of a second – it's really long.

This makes it super challenging to figure out the mechanism that causes water molecules to divide. It's like looking for a needle in a huge haystack.

NTNU researchers have recently found a way to identify the needle in just such a haystack. In their study, they combined two techniques that had not previously been used together.

Researchers had to study almost 100,000 simulation images of this type before they were able to identify what triggers the water molecules to split. Lots of computing power went into those simulations.

“We started looking at these ten thousand simulation films and analysing them manually, trying to find the reason why water molecules split,” says researcher Anders Lervik at NTNU's Department of Chemistry. He carried out his work with Professor Titus van Erp.

“After spending a lot of time studying these simulation films, we found some interesting relationships, but we also realized that the amount of data was too massive to investigate everything manually.

The researchers used a machine learning method to discover the causes that trigger the reaction. This method has never been used for simulations of this type. Through this analysis, the researchers discovered a small number of variables that describe what initiates the reactions.

What they found provides detailed knowledge of the causative mechanism, as well as ideas for ways to improve the process.

Finding ways for industrial chemical reactions to happen faster and more efficiently has taken a significant step forward with this research. It offers great potential for improving hydrogen production.