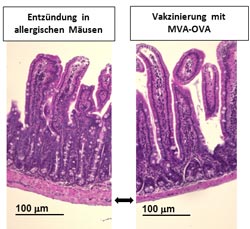 Inflammation of intestinal mucosa in allergic mice (on the left; e.g. thickened basal layer) as compared to MVA-OVA-vaccinated mice with unimpaired intestinal mucosa (on the right side).<br>Paul-Ehrlich-Institut<br>

The viruses serve a dual function: They transfer genetic information of the allergen into the target cell of the immune system and they have an inherent immunomodulatory effect. The research results have been published in the online edition of the journal Allergy of 30 July 2013 (DOI 10.1111/all.12192)

Food allergies are on the increase in all industrialised countries, affecting around five per cent of all children and four per cent of all adults. Allergen avoidance is currently the only established treatment of choice. Specific immunotherapy using allergen extracts, which is common in the treatment of pollen allergies, has not yet been established for food allergies. Moreover, there is an inherent risk of serious adverse reactions including anaphylactic shock.

Researchers of the Paul-Ehrlich-Institut have therefore taken a completely novel approach towards immunotherapy of food allergy, which is based on modified vaccinia virus Ankara (MVA). MVA is a modified vaccine virus which has been found to be safe in several clinical trials in infection medicine. MVA facilitates transfer of the genetic information of the allergen to antigen presenting cells of the body. Cells infected with the virus begin to produce the allergen and present it to the immune system. Unlike the established immunotherapy of pollen or house dust mite allergy where allergen extracts are applied directly, the new method ascertains that the immune system does not come into contact with the allergen before allergen fragments are presented on the surface of antigen presenting cells. Serious allergic reactions as in the case of direct allergen uptake via food consumption can be ruled out.

Researchers in the Allergology and Virology Divisions at the Paul-Ehrlich-Institut had already been able to show that “vaccination” of mice with MVA carrying the gene for the chicken protein ovalbumin (MVA-OVA) prevented the usually considerable increase in allergy inducing IgE antibodies in response to exposure to the allergen [1].

Which clinical significance do these changes imply? To establish this, Dr Masako Toda, head of the Temporary Research Group “Experimental Allergy Models” at the PEI, and her co-workers developed a model of intestinal food allergy in mice. Sensitisation of mice to ovalbumin led to clinical symptoms such as diarrhoea, loss of bodyweight, and drop of body temperature. The researchers of the PEI were able to show that allergic symptoms could be prevented by vaccination with MVA-OVA and, what’s more, in collaboration with researchers of Tokyo University, Japan, they were able to establish that the vaccination could prevent inflammatory changes of the intestinal mucosa (see figure).

When examining the local immune response in the small intestine, the researchers were also able to prove – based on the modified release of the cytokines (inhibition of interleukin-4 and stimulation of interferon-gamma release) – that the adverse (allergic) response of TH2 helper cells was inhibited and the desired TH1 helper cell response was stimulated. “”This is the very result we wish to see in treating an allergy: the suppression of IgE and an increase in TH1 response””, Dr Stephan Scheurer explained the success of this approach. Dr Scheurer is the head of the Section “Recombinant Allergen Therapeutics” at the PEI.

The next steps to be taken by the researchers of the PEI will be to test how long this allergy protection will last and whether the therapy approach can be used to treat fully established allergies. “”If this is possible for our model allergen ovalbumin, we assume that the model can also be transferred to other food allergens””, explained Dr Scheurer.

An allergy involves an excessive TH2 helper cell response. TH2 helper cells are a specialised group of lymphocytes of the immune system. During an allergic reaction, these cells respond to usually harmless antigens such as pollen, but also antigens in peanuts, hen's eggs, etc. Specific immunotherapy intends to re-establish the immune balance in favour of a TH1 helper response. In the above-described novel approach of immunotherapy, the modified virus Ankara not only serves as a transport vehicle of genetic information of the allergen but is also an effective immune modulator, since it creates a strong TH1 helper cell response against antigens. This process involves induction of allergen specific IgG2a antibodies, which can act as blocking antibodies, as well as cytokines (interferon-gamma) which counteract allergic reactions. This helps to restore a normal immune response.

Allergy Jul 30 [Epub ahead of print].