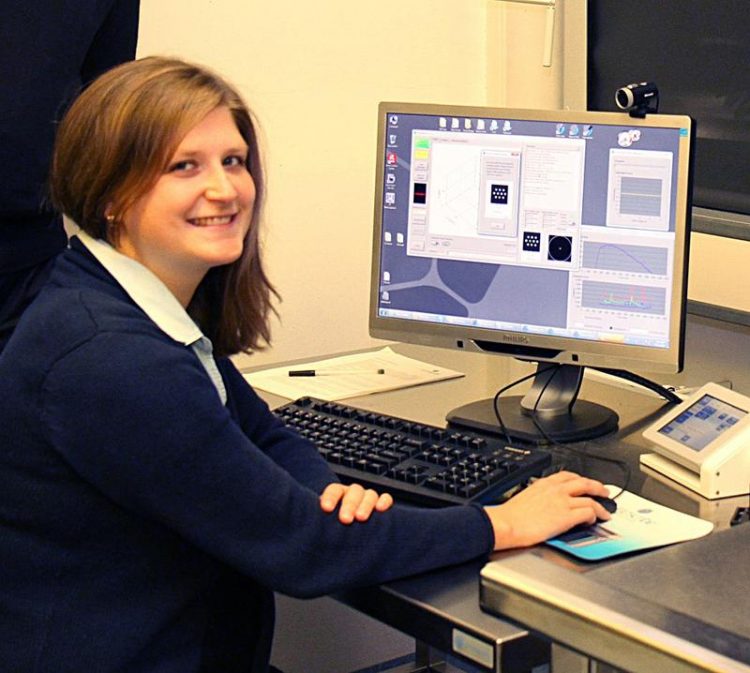 With society growing older, implants are often necessary to preserve mobility and health-related quality of life. However, by far not all implantations are successful, and often lengthy and risky after-treatments are necessary, for example because the implant is not well integrated into bone.

In order to make implants more reliable, their surface is roughened, so that the cells of the surrounding bone tissue grow faster into the surface. The cellular mechanisms of this growth enhancement are not yet known.

In a recently published study Professor Georg von Freymann and his PhD student Judith Hohmann, for the first time systematically showed the connections between three-dimensional surface structure and cell growth.

“If we understand how cells behave on differently structured surfaces, this could eventually lead to improved implants,” the young biophysicist Hohmann explains the motivation for the research project. The work was carried out at the Physics Department of the University of Kaiserslautern within the framework of the State Research Center OPTIMAS.

To better understand the interaction of the cells, various structures were fabricated with feature sizes of a few microns. For this, Hohmann made use of 3D micro-printing that builds three-dimensional polymer structures from a liquid starting material.

The structures were then coated with titanium dioxide so that they are chemically identical to the surfaces of implants. On these structures, the young scientist let then cells grow that are very similar to those of bone tissue. Cell growth was then compared to that on unstructured surfaces.

The structures resembled micro climbing frames and were also used as such by the cells. Along the scaffolds the cells grew much faster than in the control experiments without structured surfaces for adhesion contact.

The cells had a distinct preference for certain shapes and distances of different scaffolds: A change in the spacing of posts of the climbing frame-like structures had significant influence on the growth of cells. Also the cell morphology strongly depends on their structural environment. The studies provided a first approach to better understand the growth behavior of the cells on the artificial material. Fortunately, the functionality of the cells was not affected, they still behave like bone tissue.

The results of this study may in future lead to improved implants that are overgrown quicker by the surrounding bone tissue. Von Freymann and Hohmann published their results in the internationally renowned journal Advanced Functional Materials. The editor of the journal even selected their study for the cover of the print edition.