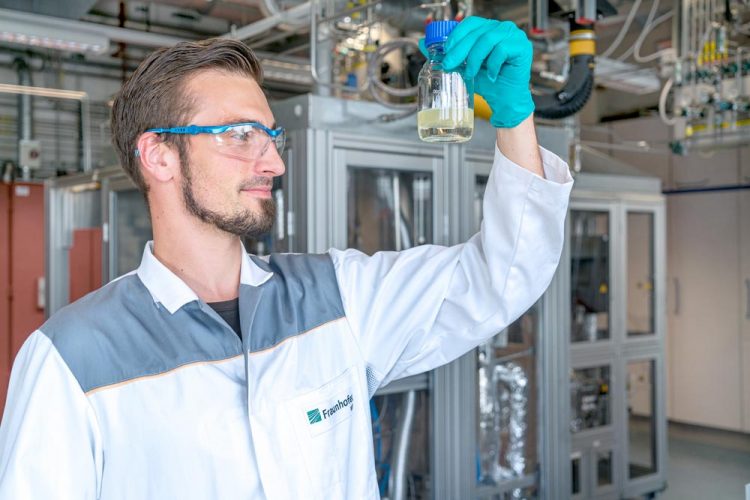 As one of the world’s largest economies, Germany ranks sixth worldwide in terms of CO2 emissions. In the industrial sector alone, 188 million tons of CO2 are produced each year.

At the same time, Germany must significantly increase the share of renewable energies in its electricity supply in order to achieve its climate targets. However, these renewable energies fluctuate over time and are not unlimited. It is therefore important to use them intelligently and above all efficiently.

Various strategies are currently being pursued for the use of unavoidable CO2 emissions, for example to produce chemical raw materials (X). For this process to be as climate-neutral as possible, the power required for it must be obtained from renewable energies – in this way climate-damaging CO2 is used to manufacture climate-neutral products.

However, such power-to-X processes are still too inefficient because they consist of many complex individual processes. Scientists at Fraunhofer IKTS have now succeeded in developing a pilot plant – consisting of ceramic-based reactors – in which CO2 can be converted into climate-neutral chemical raw materials. In these reactors, the individual processes are smartly coupled, and material and energy flows intensified. This increases efficiency compared to previous power-to-X processes.

Unavoidable CO2 emissions occur in large quantities for example in the cement and lime industries. Fraunhofer IKTS uses a wide range of ceramic components and technologies to harness this CO2. For example, ceramic filter cartridges remove dust from exhaust fumes. The CO2 can only be filtered out by ceramic membranes after such coarse cleaning.

The CO2 thus obtained is converted into carbon monoxide at over 750 °C in a newly developed ceramic high-temperature electrolysis reactor. At the same time – and this is remarkable – hydrogen is produced from steam in the same reactor, hence the name co-electrolysis. Put together, carbon monoxide and hydrogen form synthesis gas.

The reactors used are electrolysis stacks (SOEC). They were developed at IKTS and have already successfully demonstrated a long-term stability of more than 4000 hours. Compared to established alkaline or PEM electrolysis, high-temperature electrolysis requires considerably less electrical energy and also enables the direct production of synthesis gas. To produce this in a climate-neutral way, the electrolysis reactor is operated with electricity generated from renewable sources.

In a subsequent Fischer-Tropsch reactor, also developed at IKTS, the synthesis gas is then converted into chemical raw materials – for example into long-chain hydrocarbons.

Increased efficiency of the power-to-X system

“We have demonstrated on a laboratory scale that the individual processes of a power-to-X system can be intelligently coupled and combined. This is what makes our reactor concept so efficient. In the next step towards upscaling, we will build a power-to-X plant with an output of 10 kW.

On the basis of previous laboratory results and realistic assumptions for the operation of the production plant on an economic scale, we expect a significant increase in efficiency compared to today's plants,” explains Dr. Matthias Jahn, project manager and head of department Chemical Engineering at Fraunhofer IKTS.

Such an increase in efficiency to over 55 % can only be achieved through closed and thus environmentally friendly material and energy cycles. This means that by-products, such as short-chain hydrocarbons and waste heat, are no longer released into the environment, but flow directly back into the system.

“We are now looking at the next steps so that in the future many more products can be produced from CO2 emissions in a climate-neutral way. A reactor concept of this kind can also be applied to the production of lubricants, waxes for the cosmetics industry or the production of fuel additives with improved combustion properties,” summarizes Dr. Matthias Jahn. The scientists are also focusing on further automation and controllability of the individual processes.

Within the next three years, this reactor concept will be transferred to pilot scale at the Bergmann Kalk lime works in Kasendorf in Upper Franconia. Colyssy is the name of this ambitious project, which is funded by the German Federal Ministry of Education and Research and was launched at the beginning of the year as part of the HYPOS consortium.

“If we want to achieve sector coupling via power-to-X and reduce CO2 emissions, there must be economic incentives in the future. Political framework conditions need to be adapted in such a way that the additional costs incurred for climate-neutral production are offset and the product is still competitive,” Sebastian Groppweis, managing director and co-owner of the family-run Johann Bergmann Kalk company, appeals to political decision-makers.