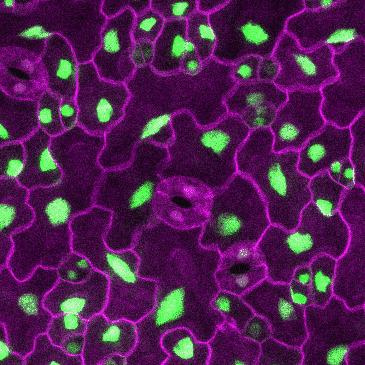 Nuclear movements over three hours in the leaf epidermis during development. The cellular outlines are shown in magenta and the nuclei, which contain the cell's DNA, are shown in green.
Credit: Andrew Muroyama

The stem cells tasked with creating and maintaining biological tissues have a difficult job. They have to precisely divide to form new specialized cells, which are destined to different fates even though they contain identical DNA. An obvious question then is: How do the cells divide in all the right ways to produce a healthy tissue?

This was the grand motivating question for Andrew Muroyama, a postdoctoral scholar in the lab of Stanford University biologist Dominique Bergmann, as he monitored days of leaf development in the flowering plant Arabidopsis thaliana. There, amongst a thousand cells under his microscope, he noticed that the nucleus – the DNA-containing control center in the cell – moved in unexpected and strangely purposeful ways as stem cells divided.

Previous research from the Bergmann lab identified a set of proteins that shuffle to one side of the stem cell before division. These proteins seemed to regulate how the stem cell divided, but the actual control mechanisms were unknown. These moving nuclei turned out to be a key to this mystery.

In a paper published Sept. 17 in Current Biology, the researchers report that these asymmetrically distributed proteins act like a compass within the cell to instruct the nucleus where to go. The nuclear position, in turn, controls the patterns of stem cell divisions, which ultimately create tiny pores, called stomata, throughout the leaf surface. Because stomata allow leaves to balance their water and carbon dioxide levels, nuclear alignment via these miniature protein compasses within individual stem cells have the potential to affect leaf function.

“I think our research highlights that the ability to watch the behaviors of cellular machines within living organisms can reveal unexpectedly elegant ways that individual cells cooperate to build tissues,” said Muroyama, who is lead author of the paper. “You might think that something as fundamental as cell division would be completely solved by now but there is still so much to learn.”

The Bergmann lab makes Arabidopsis into fluorescent art under the microscope. Bright green nuclei wiggle within purple cell membranes. Watch closely, like Muroyama did, and you would see the usual process for asymmetric cell division: when an Arabidopsis stem cell first divides, the nucleus moves to one side. That way, the resulting daughter cells will be different sizes and will face different neighbors. Eventually, these two cells are destined to play different roles in the intricate final pattern of the leaf.

But continue watching and the nucleus of one daughter cell moves again, hurrying to the opposite side of the cell where it will undergo a second asymmetric split.

“When Andrew showed me the videos of the cells, it was so bizarre,” said Bergmann, who is a professor of biology in the School of Humanities and Sciences and senior author of the paper. “I thought, ‘Why on Earth would a nucleus behave that way?’ The first move makes sense but the second, in the complete opposite direction, was weird.”

In order to understand what they were seeing, the researchers conducted several experiments to tease apart the different factors that influence the cells during division.

The researchers already knew about the cellular compass but were unsure what it was guiding or how it worked. By repelling the nucleus before the first division, the compass creates the first set of asymmetric daughters. But by attracting the nucleus immediately afterward, the compass can create a new set of asymmetric daughters on the other side.

“A critical step to understanding the function of the second migration was thinking about the longer history of the stem cells,” said Muroyama. “The plant doesn’t want to generate new stem cells right next to the ones that were just created. It wants to space them out, so moving the nucleus right after division sets it up for success when creating a second set of daughters.”

The researchers also discovered a protein that assists nuclear movement – think a motor that powers the nucleus in the right direction. Disabling that motor prevented the second migration of the nucleus and the resulting leaves had fewer stomata than usual, which could impair the plant’s ability to regulate water content and take in carbon dioxide.

It was also known that cells in the leaf surface communicate with each other to regulate stem cell divisions. Curious about whether the cellular compass or cell-to-cell communication was the dominant cue to control how stem cells divide, the researchers modified cells so that they could not receive signals from neighboring cells and watched the bouncing nuclei. Without this communication, the compass appears in the wrong place within the cell, but could still move the nucleus around in predictable ways. This showed that, when it comes to leaf stem cells, the nucleus will follow the instructions from the cellular compass, even if it steers it wrong.

As a next step, one graduate student in the Bergmann lab is already digging deeper into the purpose of the cellular compass, with particular interest into the different ways this compass can control cell divisions and fate.

More broadly, these findings point to a different way of studying stem cells that focuses less exclusively on the journey of one cell. In some systems, the individual divisions that seem to define a cell’s life may actually only be meaningful given what happens next and nearby.

“Looking back 10 years at what we thought was important for a stem cell, we’ve pretty much proven ourselves wrong,” said Bergmann. “We were so focused on the details of what one stem cell did at a specific time and place. Now we understand that history and community matter. We have to look at the stem cell and its mother and grandmother and its neighbors.”