Catalyzing the conversion of biomass to biofuel 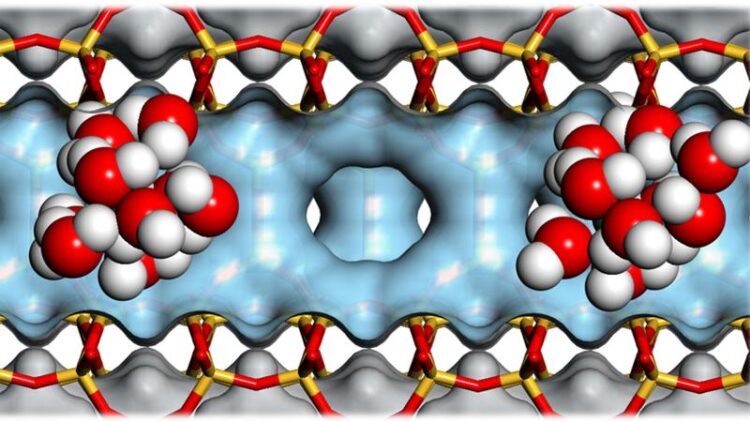 Water in zeolites saves energy in the conversion of biomass into biofuel.

Zeolites are extremely porous materials: Ten grams can have an internal surface area the size of a soccer field. Their cavities make them useful in catalyzing chemical reactions and thus saving energy. An international research team has now made new findings regarding the role of water molecules in these processes. One important application is the conversion of biomass into biofuel.

Fuel made from biomass is considered to be climate-neutral, although energy is still needed to produce it: The desired chemical reactions require high levels of temperature and pressure.

“If we are to do without fossil energy sources in the future and make efficient large-scale use of biomass, we will also have to find ways to reduce the energy required for processing the biomass,” says Johannes Lercher, professor for Chemical Technology at the Technical University of Munich (TUM) and Director of the Institute for Integrated Catalysis at the Pacific Northwest National Laboratory in Richland, Washington (USA).

Working together with an international research team, Lercher has taken a closer look at the role of water molecules in reactions inside the zeolite’s pores, which are less than one nanometer in size.

It all starts with acids

One characteristic of an acid is that it easily donates protons. Thus, when added to water, hydrochloric acid splits into negatively charged chloride anions, like those found in table salt crystals, and positively charged protons which attach themselves to the water molecules. This results in a positively charged hydronium ion, which looks to further pass on this proton, for example to an organic molecule.

When the organic molecule is “forced” to accept a proton, it tries to stabilize itself. Thus, an alcohol can give rise to a molecule with a double bond – a typical reaction step on the path from biomass to biofuel. The zeolite walls stabilize transitional states occurring during conversion and, thus, help to minimize the amount of energy required by the reaction to occur.

Zeolites contain oxygen atoms in their crystal structure which already carry a proton. Like molecular acids they form hydronium ions through the interactions with water.

However, while hydronium ions disperse in water, they remain closely associated with the zeolite. Chemical pre-treatment can vary the number of these active centers and, thus, establish a certain density of hydronium ions in the pores of the zeolite.

The ideal zeolite for every reaction

By systematically varying the size of the cavities, the density of the active sites and the amount of water, the research team was able to elucidate the pore sizes and concentrations of water which best catalyzed selected example reactions.

“In general, it’s possible to increase the reaction rate by making the pores smaller and raising the charge density,” Johannes Lercher explains. “However, this increase has its limits: When things get too crowded and the charges are too close to one another, the reaction rate drops again. This makes it possible to find the optimum conditions for every reaction.”

“Zeolites are generally suitable as nanoreactors for all chemical reactions whose reaction partners fit into the pores and in which an acid is used as a catalyst,” emphasizes Lercher. “We are at the very beginning of a development with the potential to increase the reactivity of molecules even at low temperatures and, thus, to save considerable amounts of energy in the production of fuels or chemicals.”