Cancer: The origin of genetic mutations 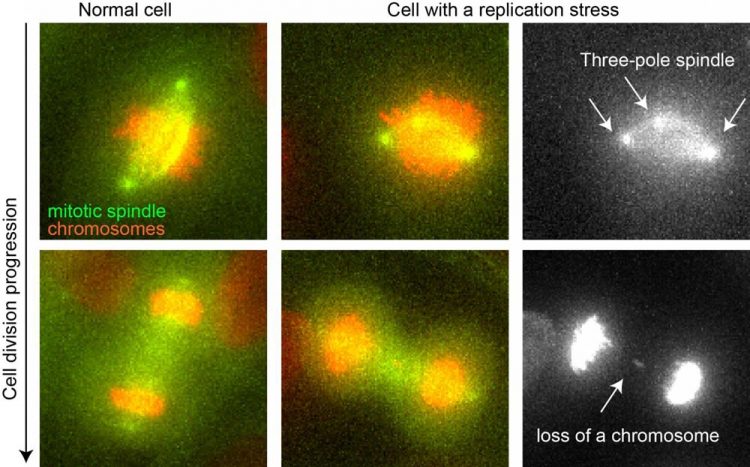 When a cell divides into two daughter cells, it must replicate its DNA according to a very specific scenario. In the presence of some disruptive elements, however, cancer cells are unable to perform this operation optimally; replication then takes place more slowly and less efficiently. This phenomenon is called “replication stress”.

While known to be linked to the increase in genetic mutations, another phenomenon typical of cancer cells, the exact mechanism at work remained unknown until now.

By deciphering how replication stress induces the loss or gain of whole chromosomes in the daughters of cancer cells, and even by reversing it in diseased cells, researchers at the University of Geneva (UNIGE) provide new knowledge that will ultimately lead to better diagnosis and possibly better treatment of cancer. Results can be discovered in the journal Nature Communications.

During a normal life cycle, the cell grows and, when all the «building blocks» necessary for DNA replication are ready, it replicates the chromosomes, which contain its genetic information. Once DNA replication is complete, the cell enters in mitosis, a term that refers to the steps governing cell division.

A mitotic spindle is then created, in which the two replicated DNA strands are separated so that the two daughter cells inherit an identical number of chromosomes. “To ensure the correct distribution of chromosomes, the mitotic spindle has two poles”, says Patrick Meraldi, professor in the Department of Cell Physiology and Metabolism and coordinator of the Translational Research Centre in Onco-haematology (CRTOH) at UNIGE Faculty of Medicine. “This bipolarization is essential for the genomic stability of both daughter cells.”

Most of the time, replication stress is due to certain molecules that, when produced in excess, become harmful. For example, cyclin E protein, involved in DNA regulation, promotes the development of cancers when overexpressed. Indeed, under its influence, cancer cells tend to replicate too early. They do not have all the components necessary for DNA synthesis yet, and this is where the errors appear.

How to create and remove replication stress

To decipher this phenomenon, the researchers artificially induced replication stress in healthy human cells with a product that slows DNA replication, and thus prevents the process from proceeding normally. “We have observed that this stress causes a malformation of the mitotic spindle which, instead of having two poles, has three or four”, explains Therese Wilhelm, a researcher in Professor Meraldi's team and co-first author of this work.

The scientists then successfully corrected the effects of replication stress in diseased cells by providing them with the missing components they needed for replication. “Not only have we established the link between replication stress and chromosomal errors, but we have been able to correct it, showing that this phenomenon, present in all cancer and even precancerous cells, is controllable”, reports Anna-Maria Olziersky, a researcher in Professor Meraldi's team and co-first author.

Could therapies exploit this phenomenon?

Through a series of experiments targeting this mechanism, the researchers demonstrated the greatest sensitivity of cells to the abnormal mitotic spindle to paclitaxel, a chemotherapeutic drug acting on the mitotic spindle and used for the treatment of breast cancer. “This shows that, in principle, it is possible to specifically target these cells without affecting healthy cells”, explains Patrick Meraldi. “The idea is not to correct the error, but rather to block the cell at this stage to prevent it from removing the additional poles, which automatically leads to its rapid death without causing damage to the still healthy neighbouring cells.”

This research was funded by the Swiss National Science Foundation, the Swiss Cancer League and the Ernest-Boninchi Foundation. CRTOH is part of the Swiss Cancer Center Léman (SCCL), a multidisciplinary alliance bringing together the UNIGE, HUG, EPFL, CHUV, UNIL and the ISREC Foundation to conduct fundamental, translational and clinical research in the field of cancer.