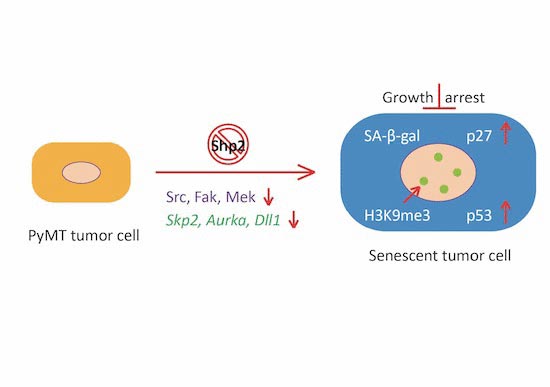 Now the research group led by Professor Walter Birchmeier (Max Delbrück Center for Molecular Medicine, MDC, Berlin-Buch) has discovered that an enzyme known to be active in breast cancer and leukemia blocks this protection program and boosts tumor growth.

The enzyme Shp2 belongs to a group of enzymes called tyrosine phosphatases. These enzymes are major cell growth regulators. Shp2, for example, plays an essential role in early embryogenesis and is also known to play a role in cancer.

Reason enough for MDC cancer researcher Professor Birchmeier, who for years has been studying signaling in cancer, to further investigate this enzyme with his research team colleagues Dr. Linxiang Lan and Dr. Jane Holland. Also, current evidence shows that senescence may play an inhibitory role in breast cancer.

The MDC researchers therefore studied mice which carried the breast cancer gene PyMT. This oncogene rapidly initiates breast cancer, which also metastasizes. The researchers noted that the enzyme Shp2 is very active in these mice.

They were able to show that Shp2 initiates a signaling cascade. Within this cascade Shp2 turns on different signaling molecules, but turns off the tumor suppressor genes p27 und p53. As a result, the senescence protection program is also shut off.

The question of interest was whether or not senescence can be turned on again. Is it possible to target Shp2 directly and shut it off? Using a small molecule, researchers of the biotech company Experimental Pharmacology and Oncology (EPO), based on the Berlin-Buch campus as is the MDC, were able to shut down the Shp2 gene in the mice with breast cancer.

In this way they were able to reactivate the senescence program and stop the growth of the breast cancer cells. The small molecule was developed by the Leibniz-Institut für molekulare Pharmakologie (FMP) in Berlin-Buch. However, it is still an experimental drug and has not been licensed for use in human patients.

The next step was to find out which role Shp2 and its target genes play in human patients with breast cancer. Dr. Balázs Györffy of Semmelweiss University in Budapest, Hungary, a longtime collaborator of Professor Birchmeier, looked at the retrospective data of almost 4,000 patients.

After analyzing the data, he and his collaborators in Berlin are convinced that the activity of Shp2 and its target genes can predict the outcome of breast cancer: The less active Shp2 is, the higher the chance for the affected women to stay relapse-free after having undergone a successful breast cancer therapy.

“Our data suggest that senescence induction by inhibiting Shp2 or controlling its targets may be useful in therapeutic approaches to breast cancer,” the researchers conclude. Cancer cells in the senescence mode secrete messenger molecules of the immune system (cytokines), enabling the body’s defense system to identify these sleeping cancer cells and destroy them.