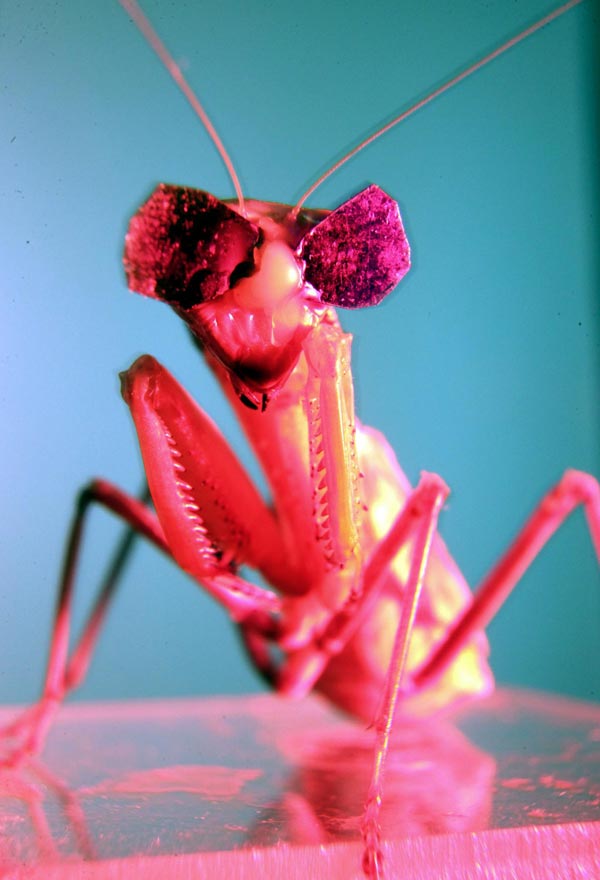 This is a mantis wearing 3D glasses. Credit: Newcastle University

Most knowledge about 3D vision has come from vertebrates, however, a team from Newcastle University, UK publishing today in Scientific Reports, confirm that the praying mantis, an invertebrate, does indeed use stereopsis or 3D perception for hunting.

In a specially-designed insect cinema, they have shown that it needs to be 'old school' 3D glasses for tests to work on mantises. While in humans that would be with red and blue lenses, red light is poorly visible to mantises so they have custom-made glasses with one blue and one green lens!

3D vision in mantises was originally shown in the 1980s by Samuel Rossel, but his work used prisms and occluders which meant that only a very limited set of images could be shown. The Newcastle University team has developed 3D glasses suitable for insects which means they can show the insects any images they want, opening up new avenues of research.

Study leader, Jenny Read, Professor of Vision Science said: “Despite their minute brains, mantises are sophisticated visual hunters which can capture prey with terrifying efficiency. We can learn a lot by studying how they perceive the world.

“Better understanding of their simpler processing systems helps us understand how 3D vision evolved, and could lead to possible new algorithms for 3D depth perception in computers.”

In the experiments, mantises fitted with tiny glasses attached with beeswax were shown short videos of simulated bugs moving around a computer screen. The mantises didn't try to catch the bugs when they were in 2D. But when the bugs were shown in 3D, apparently floating in front of the screen, the mantises struck out at them. This shows that mantises do indeed use 3D vision.

Dr Vivek Nityananda, sensory biologist at Newcastle University and part of the research team continues: “When this system failed we looked at the old-style 3D glasses with red and blue lenses. Since red light is poorly visible to mantises, we used green and blue glasses and an LED monitor with unusually narrow output in the green and blue wavelength.

“We definitively demonstrated 3D vision or stereopsis in mantises and also showed that this technique can be effectively used to deliver virtual 3D stimuli to insects.”

The Newcastle University team will now continue the research examining the algorithms used for depth perception in insects to better understand how human vision evolved and to develop new ways of adding 3D technology to computers and robots.