Breaking through a tumor's defenses 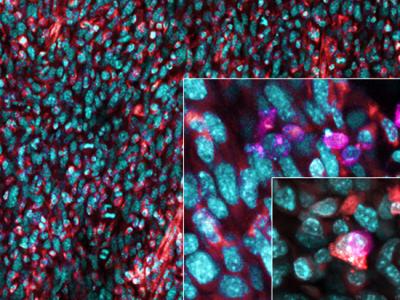 In research published today, Babraham Institute researchers have shown that some tumours use not one but two levels of protection against the immune system. Knocking out one level boosted the protective effects of the second and vice versa. The research demonstrates that a two-pronged approach targeting both cell types simultaneously may offer a promising route for the development of new cancer immunotherapies.

Specifically inhibiting the recruitment of TAMs by blocking the actions of a protein called colony-stimulating factor 1 (CSF1) reduces tumour growth in mouse models. Although clinical trials of inhibitors targeting TAMs are underway, results in patients haven't been as effective as hoped. A lack of understanding of how TAMs promote tumour progression potentially limits the therapeutic value of these inhibitors.

Likewise, inhibiting the action of Treg cells in mice by inactivating a key enzyme called PI3K delta gives protection against a range of tumours. A PI3K delta inhibitor is approved for treatment of chronic lymphocytic leukaemia (CLL) and follicular non-Hodgkin lymphoma (NHL), but the potential for PI3K delta inhibitors for the treatment of solid cancers in humans is yet to be demonstrated.

The research published today used a mouse model of colorectal cancer to explore the synergy between TAMs and Treg cells, showing that each cell type was able to compensate for the effects of the loss of the other to maintain the tumour's protection from the immune system. However, jointly inhibiting TAMs and Treg cells substantially inhibited tumour growth.

Dr David Gyori, first author on the paper, said: “Strikingly, preventing tumour immunosuppression by both TAMs and Treg cells caused almost complete tumour rejection by the immune system and half of the mice became completely tumour-free. Taken together, our findings provide a convincing rationale for assessing the clinical value of combinatorial therapies targeting the CSF1 receptor and PI3K delta.”

Professor Klaus Okkenhaug, one of the authors on the study by Gyori et al. and a parallel study by Lim et al. said: “Harnessing the power of the immune system to kill cancer cells is becoming a successful therapeutic strategy. These studies demonstrate the importance of fully understanding the interplay between the many elements of the immune system to ensure that combinatorial therapies are both synergistic and effective.”