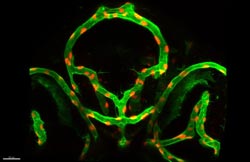 Blood vessels (green) and endothelial cell nuclei (red) in the head of a living zebrafish embryo.<br>Photo: University of Basel <br>

In this process, the blood vessels involved go through different phases of a common choreography, in which the splitting and the rearrangement of endothelial cells play a critical role. Markus Affolter`s research group at the Biozentrum, University of Basel, has been able to demonstrate this in a living organism, the zebrafish. The findings have been published in the journal „Developmental Cell“.

In the initial stages of the formation of new blood vessels, the leading cells of two vessel sprouts, the so-called tip cells, come into contact with each other. In these stages, tip cells have the task of making contact with other tip cells, to properly connect with them and so to form a common tube to establish blood flow. The research group of Markus Affolter at the Biozentrum of the University of Basel has been able to examine how this process works in detail using a living organism, the zebrafish.

The scientists showed that the generation of new blood vessels is based on an underlying uniform architectural plan. All forms of blood vessels that develop via sprouting make connections according to this blueprint. During the formation process, the tip cells of both blood vessels split after they have built the connection.

Furthermore, the team of scientists observed that the cells are subsequently rearranged so that each tip cell becomes part of a normal blood vessel. These cells can then no longer be distinguished from the other blood vessel cells. „It is practically not possible to identify the fusion site after the fusion process has been completed, „ explained Affolter. „The former tip cells can now fulfil all the functions of a blood vessel cell and are thus multifunctionally used.“ The research group was also able to show that the molecule VE-cadherin gives a signal to the blood vessel indicating that a contact between two tip cells has been successful, thereby completing the contact phase.

The zebrafish is a suitable model organism for such investigations. The developing embryo is almost transparent, which makes it possible to closely observe blood vessel generation within the living animal. It is the first time that such a cell splitting process and the transformation of the architecture of a blood vessel could be demonstrated during the formation of new vessel connections in a closed vascular system. Markus Affolter`s group would now like to more closely investigate in living zebrafish, how blood vessel tip cells recognize each other and connect, which additional molecules control the fusion process and how tumors in an organism attach to the already existing circulation.