Home / Life Sciences / Blue light for RNA control: Researchers at the Universities of Bayreuth and Bonn regulate the activity of RNA molecules
27.08.2019

Blue light for RNA control: Researchers at the Universities of Bayreuth and Bonn regulate the activity of RNA molecules 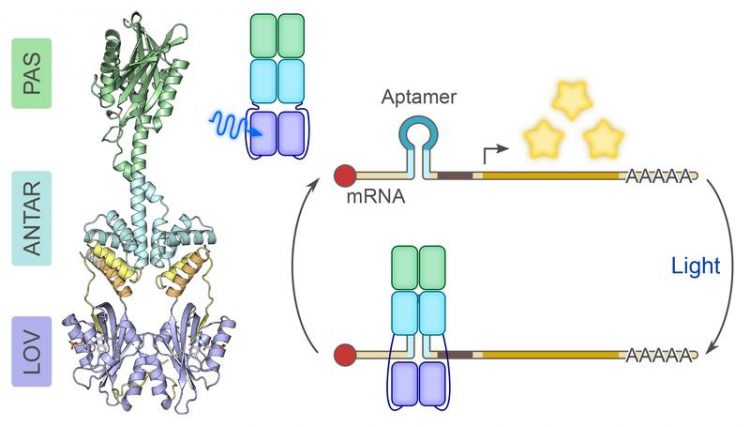 For some time now, light signals have been used to alter the transcription of genetic information – and consequently protein synthesis directed by RNA (Ribonucleic Acids) molecules – at the DNA level. This approach is part of optogenetics and is now a well-established method of molecular and cell biology.

However, the new study now shows for the first time a mechanism by which the interaction between RNA and specific proteins can be influenced by light. Gene expression in bacteria can hence be controlled directly at the level of RNA molecules.

The researchers led by Prof. Dr. Andreas Möglich in Bayreuth and Prof. Dr. Günter Mayer in Bonn have demonstrated that this mechanism can be transferred to mammalian cells. “Over the next few years, we will extend the light-controlled regulation to various cellular processes involving RNA.

The resulting tools, which have not been available to date, will greatly advance the investigation of central cellular processes. The foundation stone for optoribogenetics, a new complement to optogenetics, has now been laid,” says Prof. Dr. Andreas Möglich.

Search for a candidate protein reacting to light

The starting point of the research work was the hunt for a bacterial photoreceptor protein able to change its own binding behaviour in relation to RNA under the influence of light. The scientists searched the existing sequence databases and found what they were looking for.

Bacteria of the species Nakamurella multipartita contain a protein with a conspicuous tripartite architecture: three different sections or “domains” called “PAS”, “ANTAR” and “LOV”, are arranged one after the other in an unusual sequence.

As could be shown in cooperation with the research group of Prof. Dr. Robert Bittl at Freie Universität Berlin, the LOV photosensor domain reacts to blue light and transmits the signals to the ANTAR domain. The ANTAR domain then changes its structure so that RNA molecules are bound and thus made inaccessible: They are no longer available for gene expression and the genetic information contained in them is no longer used for the synthesis of proteins.

Only when the blue light irradiation ceases, and the ANTAR domain returns to its normal structure, does the interaction with the RNA come to a halt. Now the RNA becomes active again. The researchers first established and demonstrated this process using RNA aptamers. These are small RNA molecules with a hairpin-like structure that can enter the structure of the ANTAR domain, which is opened under blue light, and are bound there. Mayer: “Aptamers work in modular fashion: They can be linked to other units like a building block system.”

The scientists also tested their new research approach on eukaryotic cells into which they had previously introduced the bacterial protein and the RNA aptamers. In these cells, too, the structural changes triggered by blue light lead to messenger RNA molecules binding to the protein and, in this state, suspending gene expression. “We now have a light switch with which the cellular activity of different RNA molecules can be specifically switched on and off,” explains Prof. Dr. Günter Mayer from the LIMES Institute at the University of Bonn.

His colleague from Bayreuth, Prof. Dr. Andreas Möglich, adds: “The approach to light-regulated control can in principle be transferred to numerous other RNA-based processes, such as the processing of micro-RNAs and the associated phenomenon of gene silencing.” In subsequent studies, the two scientists and their research groups hope to investigate the extent to which the newly discovered mechanism can be used in model organisms to control gene expression and other processes.