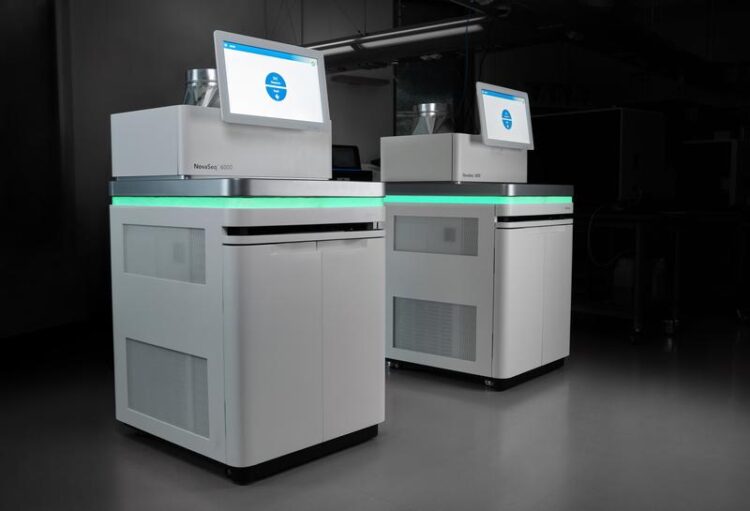 High-throughput sequencing can be used to obtain the genetic information of a living organism within a few hours.
© SoulPicture|Kiel, IKMB University of Kiel

In a large genome study, a Kiel University research team demonstrates correlations between certain gene variants and the composition of bacterial colonization in the human body

For several years, scientists worldwide have been investigating the extent to which microorganisms living in and on the human body influence central life processes and thus health and disease. Today they assume that there is a connection between the totality of the microbial colonization in the human body, called the microbiome, and the development of diseases. Chronic inflammatory bowel disease (CIBD) in particular is suspected to be closely linked to the composition and (im-)balance of the intestinal microbiome. However, the causal relationship between the microbiome and the development of disease and determining factors of the composition of the microbiome in the individual are still largely unexplained.

Researchers at Kiel University have now investigated possible influences of genetics, i.e. individual human genetic information, on the composition of the microbiome. To this end, they have carried out a large-scale genome study with data from almost 9000 test persons in search of connections between genetics and colonizing microorganisms. Among other things, the research team from the Institute of Clinical Molecular Biology (IKMB) headed by Professor Andre Franke finds a previously unknown connection between genetic variations responsible for blood type and the occurrence and frequency of certain types of bacteria. The researchers published their results today in the renowned journal Nature Genetics as part of the Collaborative Research Center (CRC) 1182 “Origin and Function of Metaorganisms”.

The new publication is based on insights from a smaller study that found first indications of the influence of genetic variations on the intestinal microbiome. The scientists have now succeeded in analyzing intestinal microbiome samples from five extensive cohorts from three German locations – mainly Kiel, Augsburg and Greifswald – and were thus able to conduct the largest so-called genome-wide association study (GWAS) in Germany. In the process, the research team discovered 38 striking so-called genetic loci, i.e. the physical positions of individual genes within the overall genetic information, which indicate a relationship between individual genetics and the composition of the microbiome.

“We made the most interesting observation in the context of the genetic factors responsible for the expression of the blood group antigens in humans,” emphasizes first author Dr Malte Rühlemann, scientist at the IKMB and member of the CRC 1182. “These genes responsible for the ABO blood group system determine which blood type a person belongs to. In some people, so called ‘secretors’, these blood group antigens are not only formed on the surface of red blood cells but are also released into the intestine. These are mainly sugar residues, which can possibly be used as an energy source by some bacteria of the Bacteroides group, making these occur more frequently. Particularly in people with blood groups A, AB or B, this mechanism thus seems to directly promote the occurrence of these bacteria in the human intestine,” Rühlemann continues.

This correlation potentially has great significance for health, because in about 20 percent of the world’s population belonging to the group of ‘non-secretors’ as well as in people with blood group 0, these complex sugars are not secreted, consequently leading to a deviating microbial composition in the intestine. “These metabolites appear to be important molecules in the interaction between host and various microorganisms”, explains Rühlemann, who is also a researcher in the “Precision Medicine in Chronic Inflammation” (PMI) Cluster of Excellence. “Previous studies could show that people without this secretion pathway are better protected against norovirus infections, for example,” Rühlemann continued. In the working group of CRC1182 member and co-author Professor John Baines at Kiel University’s Institute of Experimental Medicine, these metabolic pathways have been intensively researched for several years.

The example illustrates the effects that individual genetic variation has on human metabolism and can thus help determine the composition of the microbiome. In the future, the researchers try to better understand the mechanisms on which this interaction between humans and microorganisms are based in detail. On a larger scale, the new results of the Kiel research team provide further explanations for the formation of the human microbiome as a whole: in addition to environmental and nutritional influences, the genetics of the human host is apparently also a central factor influencing the bacterial colonization of the body. Thus, the microbiome would be more than a random collection of microorganisms available in the environment.

Therapeutic goals in the intestinal microbiome?

In order to be able to derive clear causal relationships between the bacterial colonization of the body and the development of disease in the future, the Kiel researchers in the CRC 1182, in the PMI Excellence Cluster and within the Research Unit miTarget want to identify, step by step, further factors that contribute to the composition and balance of the intestinal microbiome. One approach will be to identify individual critical bacterial species, whose occurrence and frequency, both as risk and protective factors, significantly influence the microbial colonization of the body. “Our analyses of extensive amounts of genetic data within the framework of large cohort studies will provide clinicians with valuable information about the points at which they can best intervene in the microbiome in order to specifically treat diseases based on a disturbed bacterial colonization in the future,” emphasizes Professor Andre Franke, member of the CRC 1182 and PMI Cluster of Excellence and spokesperson of the miTarget Research Unit. “The identification of such therapeutic targets is an important first step towards future treatment of, for example, chronic intestinal inflammation by specifically changing the composition of the microbiome,” Franke concludes.

https://www.uni-kiel.de/de/pressemitteilungen/2021/006-ruehlemann-naturegen-sequ…
Caption: High-throughput sequencing can be used to obtain the genetic information of a living organism within a few hours.
© SoulPicture|Kiel, IKMB University of Kiel

https://www.uni-kiel.de/de/pressemitteilungen/2021/006-ruehlemann-naturegen-auth…
Caption: Dr Malte Rühlemann of IKMB at Kiel University found evidence of a link between individual genetics and the composition of the microbiome.
© Private