Blood flows could be more turbulent than previously expected 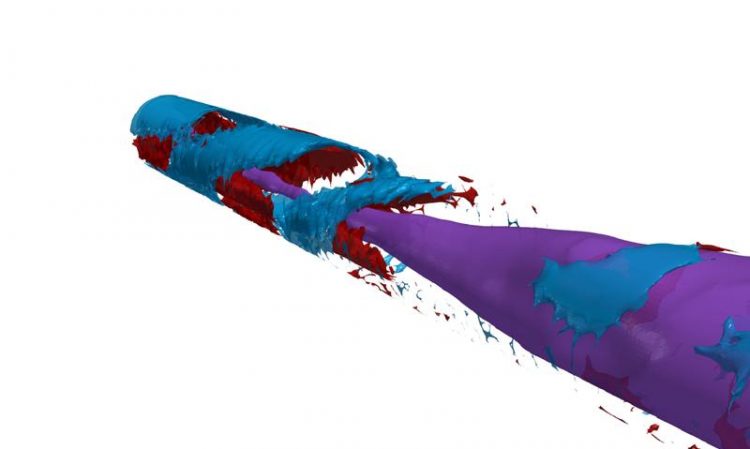 Blood flow in the human body is generally assumed to be smooth due to its low speed and high viscosity. Unsteadiness in blood flow is linked to various cardiovascular diseases and has been shown to promote dysfunction and inflammation in the inner layer of blood vessels, the endothelium.

In turn, this can lead to the development of arteriosclerosis—a leading cause of death worldwide—where arterial pathways in the body narrow due to plaque buildup. However, the source of this unsteadiness is not well understood.

Now, IST Austria professor Björn Hof, together with an international team of researchers, has shown that pulsating blood flows, such as those from our heart, react strongly to geometric irregularities in vessels (such as plaque buildup) and cause much higher levels of velocity fluctuations than previously expected. The research could have implications on how we study blood flow related diseases in the future.

“In this project, we wanted to explore if insights we recently gained regarding the origin of turbulence in pipe flow can shed light on instabilities in pulsatile flows and to cardiovascular flow in blood vessels,” says Hof.

“Our results indicate that a previously unknown mechanism may cause turbulence in pulsating flows within the human body at lower flow velocities than previously thought.”

Why is turbulent blood flow hazardous to health?

However, if turbulence arises in the vessel (e.g., due to a geometric irregularity), the flow becomes multi-directional and results in changing shear stress forces on the endothelium. Such stress fluctuations can trigger cellular dysfunction, inflammation of the endothelium and, in the long term, arteriosclerosis.

The team has proven both experimentally and theoretically, that blood vessels with geometric irregularities are likely to cause more turbulence than previously thought. In their experiments, which were conducted at IST Austria, team member Dr. Atul Varshney was able to demonstrate that, when pulsating blood flow slows down (e.g., in between heartbeats), turbulence was created, especially in areas that had geometric irregularity. Once the flow was accelerated again, such as with the beat of a heart, it became smooth and turbulent free (otherwise known as laminar flow).

This means that if a blood vessel is not ideally shaped or has geometric irregularities, more turbulent flow is likely to occur with each pulse cycle or heartbeat. The research could have important ramifications in how the medical community models blood flow, especially in large blood vessels such as the aorta.

Hof concludes: “It is astonishing that this instability has been overlooked in earlier studies. We suspect, also because of the complex composition of blood, that there may be other mechanisms that can cause turbulence in cardiovascular flow at even lower speeds. Like in the present study, also our future work will aim to identify fundamental mechanisms that are relevant to other areas such as medicine.”

About the Hof group at IST Austria

Most fluid flows of practical interest are turbulent, yet our understanding of this phenomenon is very limited. The Hof group seeks to gain insight into the nature of turbulence and the dynamics of complex fluids. The group combines detailed laboratory experiments with highly resolved computer simulations, and applies methods from nonlinear dynamics and statistical physics, enabling them to decipher key aspects of the transition from smooth to turbulent flow.

Funding information:
The IST Austria part of this project was supported by funding from the European Union’s Horizon 2020 program (Marie Skłodowska-Curie Grant no. 754411) as well as grants from the Austrian Science Fund (FWF).