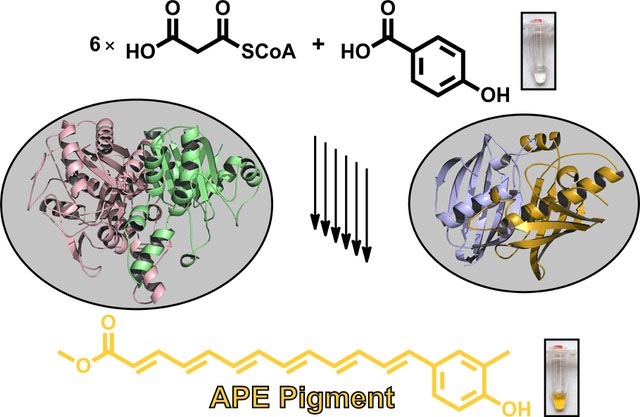 Biosynthesis of the yellow aryl polyene protective pigments from simple precursors that are very widespread in bacteria. Credit: Maximilian Schmalhofer

Bacteria can protect themselves from the attack of free radicals using specific natural products in their membranes.

The biosynthesis of one of the most common protective pigments that could also be of interest for the medical and cosmetic industries has now been uncovered by researchers from Goethe University and TU Munich.

Aryl polyene are yellow pigments produced by bacteria living in widely varying environments such as soil, the human intestines or other ecological niches. Embedded in the membrane of the bacteria, they serve as protection against oxidative stress or reactive oxygen species. The latter can damage the cells once it enters the bacterial cell.

Although it was previously known which proteins were responsible for the formation of aryl polyenes, it was unclear how they produced the yellow pigments. The research group Molecular Biotechnology led by Professor Helge Bode (Goethe University Frankfurt), working in collaboration with the research group led by Assistant Professor Nina Morgner (Faculty of Chemistry at Goethe University) and Professor Michael Groll (Technical University of Munich), was able to reconstitute the biosynthesis of aryl polyenes in the test tube and thus elucidate the function of individual biosynthesis steps.

“Aryl polyenes’ anti-oxidative properties are similar to those of carotenoids, but are produced completely differently,” says Gina Grammbitter, who investigated this system as part of her doctoral work. “Its biosynthesis is very similar to the formation of fatty acids, but also exhibits unexpected differences,” adds Nina Morgner. “Together with Michael Groll’s group, we were able to identify unusual complexes of the proteins involved and determine their structure.”

As the researchers demonstrate in the current issue of the Journal of the American Chemical Society, aryl polyenes are produced via a novel biosynthesis pathway and are presumably located directly in the membrane of the bacteria. However, aryl polyenes are only part of a much larger natural product: “What’s still missing is the formation and structure of this overall structure,” explains Gina Grammbitter, who is currently working on exactly this issue.

Research in this field continues. The next step is to investigate the interaction of the individual enzymes and the role of aryl polyenes, e.g. in the microbiome of humans. Because of their anti-oxidation properties, aryl polyenes may also be of interest to the cosmetic industry.

Caption: Biosynthesis of the yellow aryl polyene protective pigments from simple precursors that are very widespread in bacteria.

Current news about science, teaching, and society can be found on GOETHE-UNI online (www.aktuelles.uni-frankfurt.de)

Goethe University is a research-oriented university in the European financial centre Frankfurt am Main. The university was founded in 1914 through private funding, primarily from Jewish sponsors, and has since produced pioneering achievements in the areas of social sciences, sociology and economics, medicine, quantum physics, brain research, and labour law. It gained a unique level of autonomy on 1 January 2008 by returning to its historic roots as a “foundation university”. Today, it is one of the three largest universities in Germany. Together with the Technical University of Darmstadt and the University of Mainz, it is a partner in the inter-state strategic Rhine-Main University Alliance. Internet: www.uni-frankfurt.de