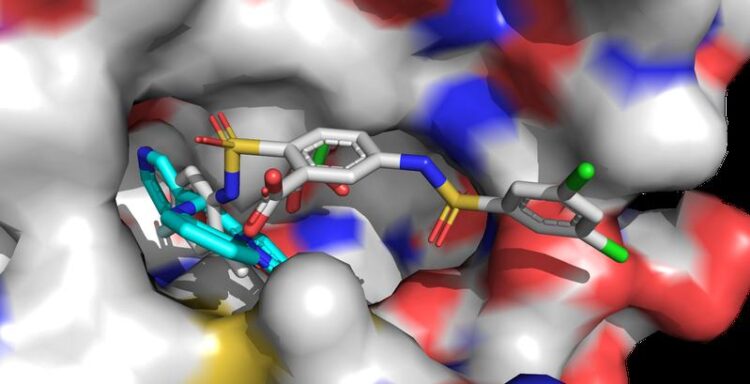 Toward the development of drugs for aging-related diseases

In the search for ways to effectively combat age-related human disease, the enzyme sirtuin 6 (Sirt6) has recently become a focus of biochemical research. A targeted activation of Sirt6 could prevent or mitigate such diseases, for example some types of cancer. In a paper for the journal “Nature Chemical Biology”, biochemists from the University of Bayreuth have now shown how the small molecule MDL-801 binds to the enzyme Sirt6 and influences its activity. These findings stand to aid the development of new drugs.

The human body contains seven different sirtuins, named “Sirt1” to “Sirt7”. These enzymes play an essential role in regulating metabolism and stress reactions. In recent years, the research team led by Prof. Dr. Clemens Steegborn at the University of Bayreuth has shown in several research articles how Sirt6 can be activated by small molecules. With their study, now published in Nature Chemical Biology, Steegborn and his research assistant Dr. Weijie You have followed up on these findings.

They found that the molecule MDL-801 interacts with Sirt6 by using a unique structural feature of this enzyme: an unusually wide binding pocket that is easily accessible from the outside and is normally involved in interacting with substrate proteins. This molecular cavity continues in an open channel that leads to the catalytic centre of Sirt6. It is in this channel, characteristic of Sirt6, that MDL-801 anchors when it activates the enzyme. Mainly through activity studies and X-ray structure analyses, Steegborn and You were able to identify both the binding site and molecular processes involved in the activation of Sirt6 by MDL-801.

As the Bayreuth biochemists have already shown in earlier studies, the active substances UBCS039, quercetin, and fluvastatin are also able to activate Sirt6. To do so, they use the same open channel in which MDL-801 docks. This elongated cavity is also called the acyl channel. As soon as Sirt6 is in an activated state, it splits off acyl groups from proteins. Thereby, it influences, among other things, the synthesis of proteins controlled by genes. Findings on the activation of Sirt6 therefore offer valuable clues for the development of active substances that could counteract aging-related diseases – for example the development of tumours.

“All small molecules for which we have so far been able to demonstrate an activating effect on Sirt6 use the acyl channel to bind to Sirtuin 6. And although their chemical structures are very different, they do this in very similar ways. This opens up the opportunity for us to use the details of their respective interactions to fine-tune activating compounds. Such drugs would then be able to regulate Sirt6 in a specific way. Thereby, they could be used in a targeted way to prevent or cure diseases associated with the ageing process,” says Steegborn.

With their new study, Steegborn and You have refuted a key statement that a research group in Shanghai published in Nature Chemical Biology in 2018. In this paper, MDL-801 was described as a new Sirt6 activator. An X-ray crystallographic structure was used to show that MDL-801 binds to a different molecular section of Sirt6 than other activators. “This structure, which resulted from a misinterpretation of experimental data, has misled numerous research teams since its publication. Our study corrects this error and thus makes it possible to work efficiently on improved activators,” says Steegborn.