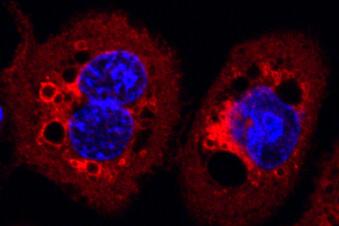 LecB of Pseudomonas aeruginosa is a bacterial virulence factor that impairs signaling of growth factor receptors- in other words, proteins found on the surface of host cells that transmit signals to promote the growth and reproduction of tissues. As a result, the cell cycle is blocked.

Lectins are proteins that bind to sugar residues on surface receptors and are not catalytically active, meaning they do not accelerate chemical processes. Many bacteria use lectins to bind effectively to the epithelium and endothelium layers of cells coating the body's surface area, thus facilitating the colonization of tissue.

The researchers discovered that the bacterial lectin LecB is present in chronically infected human wounds, therefore making it possible for Pseudomonas aeruginosa to remain in those wounds. They also determined that LecB is capable of inducing the internalization – in other words, the uptake into the cell's interior – and the degradation of growth factor receptors in keratinocytes, a type of cell in the epidermis.

The scientists also demonstrated that LecB blocks the cell cycle and causes cell death. This process is preceded by intense vacuolization, which is the development of several larger, enclosed sacs (vacuoles) within the host cell. These vacuoles, which display unique morphological characteristics, are formed by structures of plasma membranes in which LecB is enriched.

“Although lectins are not catalytically active, LecB appears to interfere with important host cell processes, like the cell cycle, in a way we don't yet understand,” says Römer, adding: “This likely occurs through a restructuring of the cell membrane triggered by LecB.”

The discovery of this new function of the Pseudomonas aeruginosa lectin LecB has motivated the team to pursue more research. As Römer says, it is possible that LecB also has this function of promoting the further damage of tissue and facilitating the spread of bacteria in other cell types as well, including immune cells. Future studies will therefore focus on the effects of LecB on immune responses in chronic wound infections.