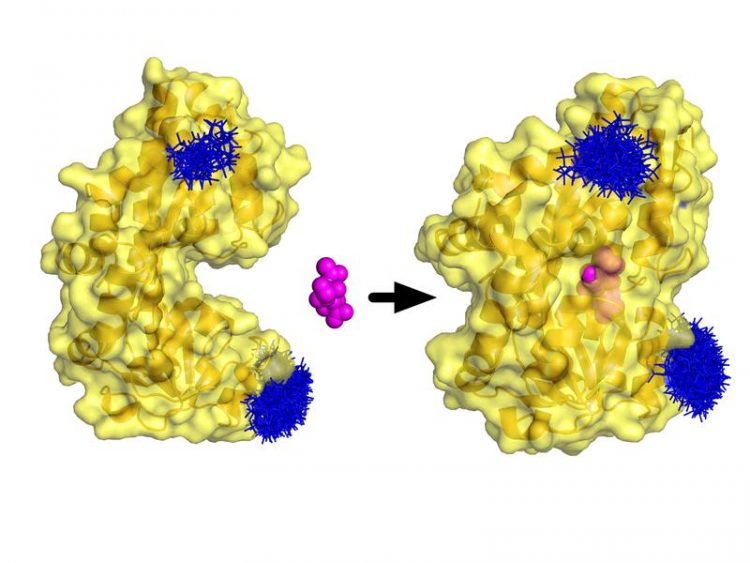 The P domain (yellow) patrols with its mouth open until it encounters a sialic acid molecule (purple). This movement was analyzed with distance measurements using the spin markers shown in blue. © Dr. Gregor Hagelüken/Uni Bonn

The cells of the mouth, nose and intestinal mucosa produce large quantities of a chemical called sialic acid. Many bacteria possess a special transport system with which they can absorb the sugar compound. They use sialic acid, for instance, to produce energy, but also to escape the eagle eyes of the immune system.

To do this, they incorporate the sugar into their cell surface. Thanks to this invisibility cloak made from substances produced naturally in the body, immune cells do not notice that the bacteria are intruders.

Many bacteria are surrounded by two membranes, which cover them like a thick skin. The absorption of sialic acid through the inner membrane often takes place via molecules that are known as TRAP transporters. They are comprised of three components.

One of these – the P domain – moves freely and patrols between the two membranes. If it meets a sialic acid molecule, it grabs it and brings it to the inner membrane, where the two other components are firmly anchored. They then translocate the sugar compound into the bacteria cell.

We have now been able to show that – metaphorically speaking – it lies in wait with its mouth open until it encounters a sugar molecule. At this moment, its jaws snap shut.” The P domain thus performs a rapid grabbing motion, which is somewhat reminiscent of the computer game character Pac Man.

The researchers used EPR spectroscopy in their work, a method with which the distances between parts of molecules can be measured precisely to a ten-millionth of a millimeter. In this way, they were able to understand the movement of the “Pac Man jaw”.

“To achieve this, we planted the blueprint for the P domain in harmless intestinal bacteria and grew them in a test tube,” explains Janin Glänzer, PhD student at the Institute for Physical and Theoretical Chemistry. “We then cleaned the protein in an elaborate procedure and provided it with various quantities of sialic acid.”

In order to investigate the masticatory movement, the researchers used a trick: they fitted molecular labels to the “jaw” of the P domain and then measured the precise distance between these markers. “We were able to show that the P domain can only exist in two forms: opened and closed,” says the chemist Martin Peter, who worked on this topic in his master thesis.

“We were not able to identify any stable intermediate form. Without sialic acid, all P domains are found in an open state. The more sugar we provided, the more P domains were closed.”

Hagelüken hopes that the knowledge may help to develop new active ingredients against pathogens. “We can, for instance, attempt to prevent the masticatory movement – for example, using a molecular muzzle.”