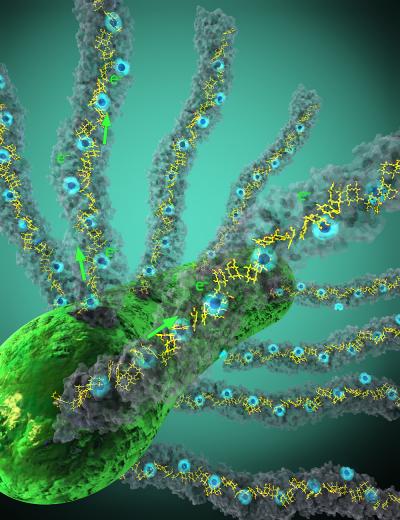 These nanowires enable the bacteria to perform environmentally important functions such as cleaning up radioactive sites and generating electricity. Scientists have long known that Geobacter make conductive nanowires – 1/100,000 the width of a human hair – but to date no one had discovered what they are made of and why they are conductive.

A new study by researchers at Yale, University of Virginia and the University of California at Irvine published April 4 in the journal Cell reveals a surprise: the protein nanowires have a core of metal-containing molecules called hemes.

Previously nobody suspected such a structure. Using high-resolution cryo-electron microscopy, the researchers were able to see the nanowire's atomic structure and discover that hemes line up to create a continuous path along which electrons travel.

“This study solves a longstanding mystery of how nanowires move electrons to minerals in the soil,” said lead author Nikhil Malvankar, assistant professor of molecular biophysics and biochemistry at Yale and a faculty member at the Microbial Sciences Institute.

“It is possible we could use these wires to connect cells to electronics to build new types of materials and sensors.”