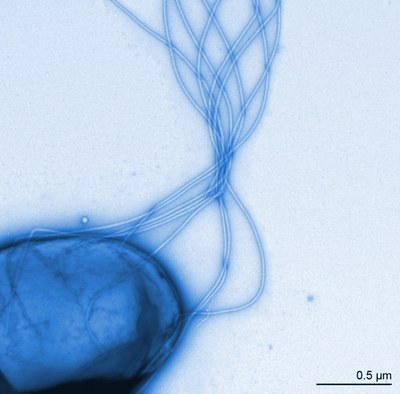 Bacteria are unicellular organisms that measure just a few micrometres in size. By rotating a propeller-like appendage, the flagellum, they are able to move in liquid environments. This ability to propel themselves is of critical importance for many pathogenic bacteria, such as Salmonella. The motility organelle of the bacteria is a complex, macromolecular structure that comprises thousands of building blocks and measures several micrometres in length.

Interestingly, bacteria can precisely measure the substructures of their flagella on a nanometre scale. In particular, the length of an extracellular joint linking structure – the flagellar hook – is fixed to around 55 nanometres.

Researchers at the Humboldt-Universität zu Berlin (HU), together with national and international colleagues from the Helmholtz Centre for Infection Research in Braunschweig, the Braunschweig Integrated Centre of Systems Biology, the University of Edinburgh, the University of Fribourg and Michigan State University, have now determined that the optimal length of the hook structure is critically important for the efficient motility of Salmonella.

As part of this research, the scientists analysed the swimming behaviour of genetically modified bacteria with various hook lengths in different environments and were able to demonstrate that Salmonella can move most efficiently in liquid environments when the hook structure measures around 55 nanometres in length.

These findings are a fascinating example that show why the locomotory organelle of bacteria has developed through the constant process of evolution into the complex, macromolecular structure seen today. The conclusions drawn by the researchers based on the structure of the locomotory organelle with regard to the swimming behaviour of bacteria could also play an important role for the future development of swimming robots at the micrometre scale.

The complete study has been published with the title ‘Hook length of the bacterial flagellum is optimized for maximal stability of the flagellar bundle’ in the scientific journal PLoS Biology.