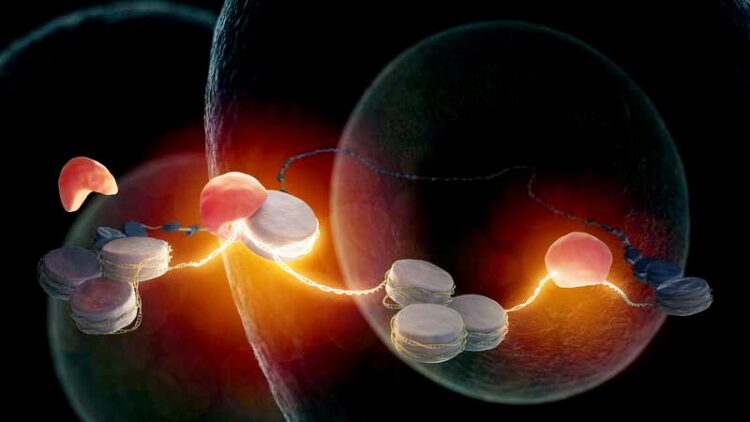 Pioneer factor Nr5a2 (red) binds to the still inactive DNA wrapped around histones (gray), of a fertilized egg cell. Thereby, it awakens the genome. Now genes can be read that are necessary for the development of an embryo.
Illustration: Max Iglesias / MPI of Biochemistry

Fertilization of an egg by sperm is the beginning of new life.

The maternal and paternal genetic information, that collectively store the body plan of the living being, are combined after fertilization. However, the DNA is still in an inactive state in the cell nucleus at this early stage of life. While the first division of the fertilized egg cell functions with the help of maternal factors stored in the egg, for further development of an embryo the synthesis of new embryonic products is necessary, which requires access to the DNA of the embryo. As shown in Science, Kikuë Tachibana and her team at the MPI of Biochemistry have now shown that pioneer factor Nr5a2 awakens the embryonic DNA.

The beginning of life is a fascinating process in biology. The female egg cell is fertilized through fusion with the male sperm cell. From this first cell of an embryo, the entire organism can develop. What molecular processes take place on the DNA of a fertilized egg to enable this cell to have the potential to generate a new organism? Kikuë Tachibana, director at MPIB and head of the research department ‘Totipotency’, is investigating this question together with her research team using the mouse model.

It is known that so-called pioneer factors bind to specific areas of inactive DNA in order to activate them. Finding out which factors these are in the case of fertilized oocytes was the subject of the current study. For this research, it took a multi-disciplinary effort of the four first authors and their complimentary expertise. “The core team of this work consists of experts in embryology, biochemistry, bioinformatics, microscopy and genomics. Together we were able to see hints in the genome, discover the transcription factor Nr5a2 and study the mechanism inside and outside of cells”, says Tachibana.

From DNA to Proteins

The fundamental building blocks of DNA – adenosine, thymine, guanine and cytosine – encode for the blueprints of all proteins occurring in the organism like in a library. Through a process called transcription, certain DNA regions, also called genes, are read and transcribed into messenger RNA (mRNA). Subsequently, proteins are produced on the basis of the mRNA instruction. Cellular structures, channels, signaling molecules or molecular machines among others are built according these molecular messages.

Siwat Ruangroengkulrith, molecular biologist and bioinformatician, explains, “The genetic information is not simply freely accessible in the cell nucleus. It is present in the form of a long DNA thread wrapped around small packaging proteins, known as histones, like a string of pearls. DNA and histones are twisted into each other to such an extent that the DNA thread is shortened up to 40,000 times. That is why we can see DNA as chromosomes under the microscope, all because of this compaction by histones.”

Pioneer factors have the ability to bind to tightly packed DNA. They belong to the large family of transcription factors. They bind to specific sequence patterns on the DNA to transcribe the gene sequence. Imre Gáspár, an expert in microscopy and bioinformatics, explains: “We searched for a common sequence pattern for the early-stage mRNA molecules produced in embryos and were able to find several sequence motifs. The discovered motifs are close to each other and form a so-called supermotif. The newly discovered supermotif resembles the known sequence motif SINE B1 element and is very closely related to the highly conserved ALU element in the human genome. These elements are also known as ‘jumping genes’ because they can move from one position to another position in the genome at certain cellular stages, such as in the early embryo.”

Nr5a2 binds to this supermotif. Johanna Gassler, embryologist, explains, “Originally, Nr5a2 was discovered in the liver. In the field of developmental biology, Nr5a2 was known to be important at the late stage of embryo implantation. How important Nr5a2 is directly after fertilization was not yet known. In our experiments we were able to show that the majority of early embryonic mRNA molecules are no longer produced once Nr5a2 has been blocked. Furthermore, the embryos are inhibited in their further development. This shows that Nr5a2 plays a central role in the earliest stage of embryo development.”

Using the latest biochemical and genomic methods, the researchers have tested how Nr5a2 functions during early development. Wataru Kobayashi, biochemist, explains, ‘We have experimentally shown that Nr5a2 can open inactive DNA regions, making more areas of DNA accessible for subsequent transcription processes.’ Thus, the genome is activated at the two-cell stage and an embryo, and eventually a fully viable organism, can develop.

Tachibana, looking to the future, “The discovery that Nr5a2 is a key factor driving genome awakening is an important stepping stone towards achieving a mechanistic understanding of the start of life. It is equally clear that there must be other contributing factors that remain to be identified. So far, our work provides a conceptual framework ‘ex uno plura’, (lat. many from one), that can explain how the transcriptional activation occurs robustly in early embryos to ensure development into a whole organism.”