Home / Life Sciences / Atacama Desert: Some lichens can meet their need for water from air humidity
17.07.2019

Atacama Desert: Some lichens can meet their need for water from air humidity 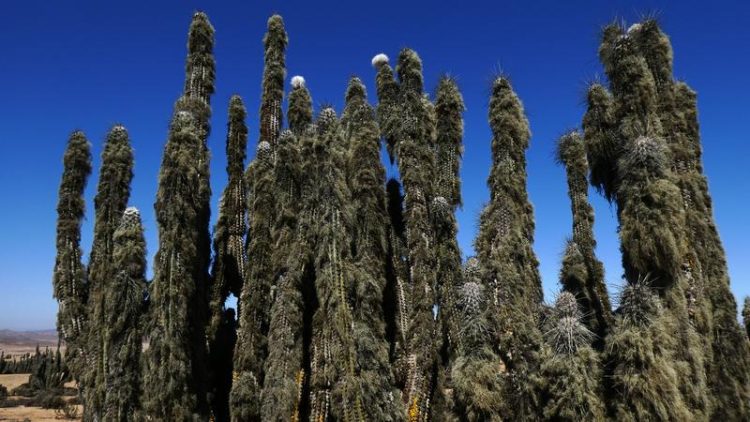 These lichens usually have a bearded structure that hangs down from the cacti. Credit: Patrick Jung

The Atacama Desert extends in the east of South America on a high plateau along the Pacific coast. Water vapour regularly rises here on the steep rocky coasts. In the form of fog, also called camanchaca, it finally moves inland.

“These oases of fog contain many cacti and above all lichens,” says Dr Patrick Jung, first author of the current study and scientist in the Department of Plant Ecology and Systematics at TUK. Lichens resemble symbiotic organisms of at least one fungus and at least one algae carrying out photosynthesis. These can be green algae or cyanobacteria.

“We wanted to know how lichens use fog and high air humidity as water sources, since rain plays no role here,” says Jung. If there is no water available, lichens fall into a resting state in order to save energy.

For their study, the scientists compared lichens on the ground with their conspecifics that grow on cacti. In the professional world, such organisms are also known as epiphytes.

“They usually have a bearded structure that hangs down from the cacti,” Jung describes the lichens. “The water of the mist gathers in it and falls as a drop to the ground, which is then used in turn by the cacti.”

This ratio depends on the water content of the lichen. “With these difference values we can determine how high the potential photosynthetic activity of the lichens is,” explains Jung.

The team around the Kaiserslautern botanist found out that the plants use the fog water very efficiently: “After only three minutes, they start to be photosynthetically active.” This applies both to the species on the ground and to those on the cacti. In another experiment, they studied how lichens make use of high air humidity, which can also be over 90 percent at natural sites. The study has revealed that only epiphytic lichens use such as water source. “We still have no idea what the reason is,” Jung continues.

“The lichens on the cacti have a clear advantage over their conspecifics on the ground, because they can be active by not only exploiting fog and dew but also high humidity over a longer period of time.” Therefore a variety of cacti covered with lichens and relatively few lichens that colonize the ground can be found in this fog oasis. This is also why many epiphytic lichens form the food basis of the native guanacos, a small camel species, and represent an important link in the food ecosystem of the barren landscape.

In their work, the botanists also sequenced the lichens genes and discovered a new species. They named this new yellow lichen Acarospora conafii. “The name derives from Conaf,” says the Kaiserslautern researcher. The abbreviation stands for the Chilean Forest Authority (Corporación Nacional Forestal), which supported the research. Their rangers also take care of the National Park “Pan de Azúcar”, which is located in the Atacama Desert and where the team around Jung studied the lichens.

The study has been published on the online platform MikrobiologyOpen: „Ecophysiology and phylogeny of new terricolous and epiphytic chlorolichens in a fog oasis of the Atacama Desert“

MikrobiologyOpen: „Ecophysiology and phylogeny of new terricolous and epiphytic chlorolichens in a fog oasis of the Atacama Desert“
DOI: https://doi.org/10.5061/dryad.jc06126