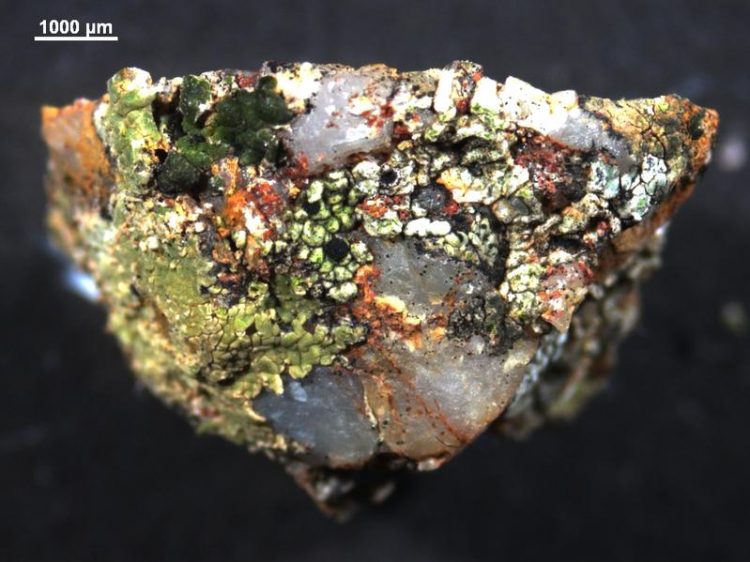 A small grit stone with lichens on it. Credit: Patrick Jung

Many desert areas have large black spots in the sand. These spots are mineral deposits, so-called desert varnish. In the Atacama Desert, which can be compared to Mars, the team led by Dr Patrick Jung of Technische Universität Kaiserslautern (TUK) also identified such places and initially did not attach any importance to them.

“We noticed, however, that the black colour becomes more intense when fog approaches,” says the scientist, who is also the first author of the current study. Reason enough to take a closer look at the phenomenon. These black spots are an accumulation of quartz and granite stones with a size of six millimetre, the grit, as it is called in the technical jargon. “They cover the entire Pan de Azúcar National Park,” says Jung.

The scientists led by Jung have measured the photosynthesis activity of these spots with a special device which emits light rays. An organism that carries out photosynthesis uses some of this light for this purpose, but not all of it. Based on the difference, it can be determined whether it is photosynthetically active.

“There was actually a reaction there,” Jung continues. The team then took a closer look at this rock. “We found a biocoenosis of algae, lichens, cyanobacteria and fungi,” he adds. They enclose the little stones, but also form a kind of net with which they grow over several little stones and form a crust. For their study, the team also evaluated data from drone and satellite images.

“Large areas of the national park, covering 360 square metres and beyond, are covered by this biocoenosis in the form of extensive black spots.”

In the laboratory in Kaiserslautern, Jung examined the organisms of this biocoenosis in more detail. “Such biological soil crusts can also be found in other regions of the world,” explains the biologist. “However, what we are dealing with here is a new type of crust that populates tiny stones. We have therefore named it Grit Crust.”

During his laboratory analyses, the biologist also discovered that the organisms do not only settle on the small stones. “They also grow inside,” he explains. This is due to the porous rock structure. Since the stones are quite bright, there is also enough light to carry out photosynthesis.

This also offers another advantage, as Jung explains: “The stones are cooler than their environment, which means that the fog tends to condense there.” In this way, more moisture is available to the biocoenosis than elsewhere in the Atacama Desert, which is the reason for the special relationship between the organisms and the grit stones.

The scientists have also investigated under which circumstances the organisms perform photosynthesis best. Compared to biological soil crusts from other deserts on earth, the grit crust of the Atacama Desert requires only half as much water, which illustrates the outstanding adaptation to the amount of water brought in by dew and fog and the absence of rain.

The climatic and geological conditions of the Atacama Desert are similar to those of Mars, and the minimal needs for water availability of these organisms could make them candidates for future colonization of Mars, the researchers speculate.

Due to the close bio-geological relationship between the organisms and the grit stones, the researchers believe that the microorganisms are also involved in decomposition processes through their activities. Since this biocoenosis can also be found on larger stones, it might have shaped the landscape of the Atacama Desert over the last millennia.

“This would mean that the smaller stones on which we found the living beings are the result of these processes,” summarises Jung. Subsequent studies will have to show to what extent Jung's team is right with this hypothesis.

The study was published in the renowned scientific journal “Gebiology”. It also made it onto the cover of the current issue: „Desert breath — How fog promotes a novel type of soil biocoenosis, forming the coastal Atacama Desert’s living skin“
DOI: https://doi.org/10.1111/gbi.12368

The work involved Jung as well as Michael Schermer and Burkhard Büdel of Technische Universität Kaiserslautern, Karen Baumann, Kai-Uwe Eckhardt, Peter Leinweber, Elena Samolov and Ulf Karsten of the University of Rostock, Lukas W. Lehnert of the Ludwig-Maximilian-University Munich as well as Sebastian Achilles, Jörg Bendix, Maaike Y. Bader and Luise M. Wraase from the Philipps University of Marburg. The research was funded by the German Research Foundation (DFG) as part of the EarthShape programme.

Until recently, Dr. Patrick Jung worked in the Department of Plant Ecology and Systematics at Technische Universität Kaiserslautern. In the meantime he is doing research at the University of Applied Sciences Kaiserslautern at the Pirmasens site.