Artificial DNA can control release of active ingredients from drugs 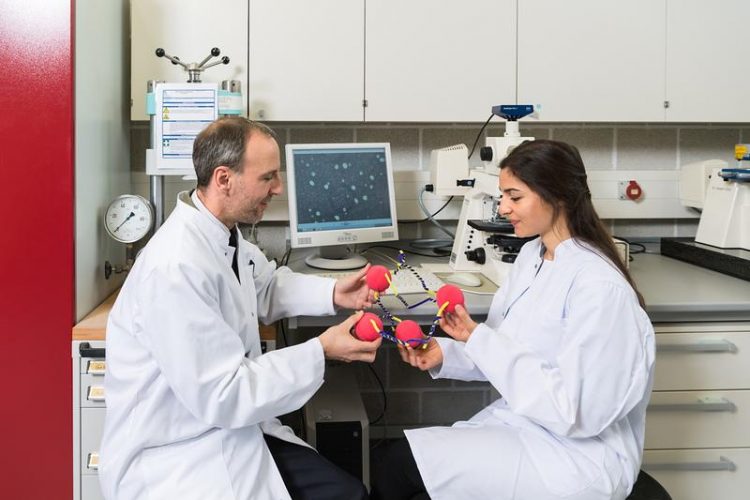 It is becoming much more common for patients to be treated with several different medications. It is often necessary for the patient to take them at fixed intervals – a limitation that makes everyday life difficult and increases the risk of doses being skipped or forgotten.

Oliver Lieleg, a professor of biomechanics and a member of the Munich School of BioEngineering at TUM, and doctoral candidate Ceren Kimna have now developed a process that could serve as the basis for medications containing several active ingredients that would reliably release them in the body in a pre-defined sequence at specified times.

“For example, an ointment applied to a surgical incision could release pain medication first, followed by an anti-inflammatory drug and then a drug to reduce swelling,” explains Oliver Lieleg.

One active ingredient after the other

“Ointments or creams releasing their active ingredients with a time delay are not new in themselves,” says Oliver Lieleg. With the drugs currently in use, however, there is no guarantee that two or more active ingredients will not be released into the organism simultaneously.

To test the principle behind their idea, Oliver Lieleg and Ceren Kimna used nanometer-sized silver, iron oxide and gold particles embedded in a special gel-like substance known as a hydrogel. They then used a spectroscopic method to track the exit of the particles from the gel.

The particles selected by the researchers have similar motion characteristics within the gel to the particles used to transport real active ingredients, but are easier and cheaper to make.

The special ingredient controlling the nanoparticles is artificial DNA. In nature, DNA is above all the carrier of genetic information. However, researchers are increasingly exploiting another property: The ability of DNA fragments to be combined with great accuracy, both in terms of the types of bonds and their strength, for example to build machines on a nanometer scale.

The DNA cascade: compress and then release at the right instant

The silver particles were released first. In the initial state, the particles were bound together by DNA fragments designed by Lieleg and Kimna using special software. The resulting particle clusters are so large that they are unable to move in the hydrogel. However, when a saline solution is added, they separate from the DNA. They can now move in the gel and drift to the surface.

“Because the saline solution has approximately the same salinity as the human body, we were able to simulate conditions where the active ingredients would not be released until the medication is applied,” explains Ceren Kimna.

The iron oxide particles can only be released when the first clusters have dissolved. This event releases not only the silver nanoparticles, but also DNA, which eliminates the “connection DNA” of the second cluster without forming connections itself. As a result, the iron oxide particles can separate. This releases DNA fragments which in turn act as the key to the third DNA-nanoparticle combination.

“The consistency of ointments makes them the most obvious solution for a hydrogel-based approach. However, this principle also has the potential to be used in tablets that could release several effective ingredients in the body in a specific order,” explains Prof. Lieleg.

Prof. Lieleg’s lab is part of the Munich School of BioEngineering (MSB). This interdisciplinary TUM research center is Europe’s most multi-disciplinary university institution focused on the interface between medicine, engineering and natural sciences.