How Argonaute Proteins Intervene in the Gene Regulation Process 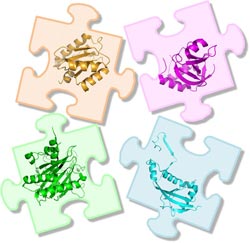 Bioscientists at Heidelberg University have studied the function of certain proteins, known as Argonaute (Ago) proteins, in the process of gene regulation. They sought to understand why only the Ago2 protein is able to target and directly turn off genes in humans, while the closely related Ago3 protein is not.

Using a new investigative method, researchers working with Dr. Dirk Grimm were able to identify for the first time two “motifs” of this protein that, when properly combined with an already known protein domain, give Ago2 its gene-silencing capability. The researchers hope that the results will open up new avenues in basic biological and medical research toward artificially induced gene silencing.

With the aid of their special “directed protein evolution” method, the Heidelberg scientists were able to generate a large library of “hybrids” from human Ago2 and its close cousin Ago3. Individual proteins with the characteristics – the phenotype – of Ago2 were isolated from these chimaeras. A comparative bioinformatic analysis of the candidates with the strongest Ago2 phenotype yielded an “astonishing result”, according to Dr. Grimm. The researchers from Heidelberg University's “CellNetworks” Cluster of Excellence observed a recurring accumulation of two short motifs in a special domain of the Argonaute protein, the N terminus at the end of the protein.

“This result was unexpected since the prevailing view holds that a completely different and known protein domain called the PIWI domain is solely responsible for the gene-regulating properties of Ago2,” explains Dr. Grimm. “We were able to show, however, that only the correct combination of these three protein components gives Ago2 the ability to turn off genes in a special way.” Gene silencing is based on what is known as RNA interference. Ago2, also called the slicer, slices the messenger RNA that transports the data stored in the DNA and translates it into proteins.

According to lead author Nina Schürmann, the results of this research provide new insight into Argonaute proteins. The results demonstrate that special Ago functions are not determined by isolated protein domains, but through the complex interaction of multiple activating or inhibiting domains. The researchers now hope that they will be able to generate completely new protein characteristics in future and, as a result, possibly even further improve RNA interference processes, according to Dr. Grimm. To advance the research further, the Heidelberg scientists generated a library of chimaeras of all four human Argonaute proteins as well as developed analysis software that can also benefit other users. In cooperation with Prof. Dr. Robert Russell and Dr. Leonardo Trabuco, likewise researchers in the “CellNetworks” Cluster of Excellence, a structure of human Ago3 could be modelled for the first time.

Dirk Grimm directs the CellNetworks “Virus-Host Interactions” Junior Research Group, which is located in the BioQuant Center of Heidelberg University. The group belongs to Heidelberg University Hospital‘s Department of Infectious Diseases under the direction of Prof. Dr. Hans-Georg Kräusslich and is supported by the Chica and Heinz Schaller Foundation (CHS). The results of the research were published in “Nature Structural & Molecular Biology”.