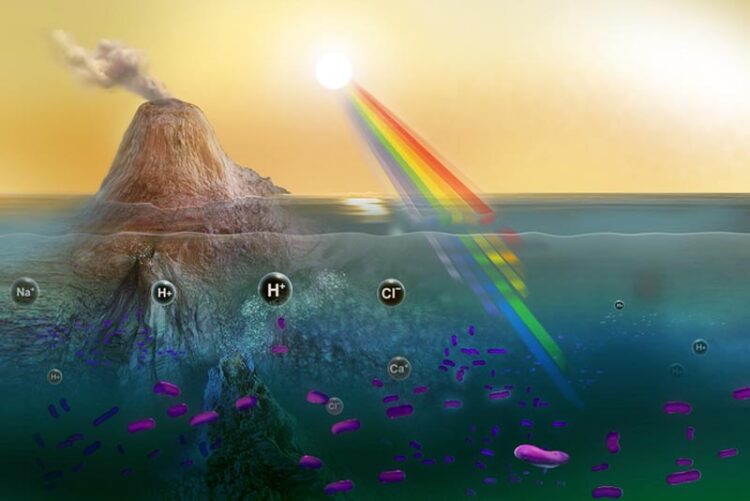 Artist's rendering of the process by which microbes captured sunlight for energy with rhodopsin proteins.
Credit: Sohail Wasif/UCR

Earth of billions of years ago illuminated by light-capturing proteins.

Using light-capturing proteins in living microbes, scientists have reconstructed what life was like for some of Earth’s earliest organisms. These efforts could help us recognize signs of life on other planets, whose atmospheres may more closely resemble our pre-oxygen planet.

The earliest living things, including bacteria and single-celled organisms called archaea, inhabited a primarily oceanic planet without an ozone layer to protect them from the sun’s radiation. These microbes evolved rhodopsins — proteins with the ability to turn sunlight into energy, using them to power cellular processes.

“On early Earth, energy may have been very scarce. Bacteria and archaea figured out how to use the plentiful energy from the sun without the complex biomolecules required for photosynthesis,” said UC Riverside astrobiologist Edward Schwieterman, who is co-author of a study describing the research.

Rhodopsins are related to rods and cones in human eyes that enable us to distinguish between light and dark and see colors. They are also widely distributed among modern organisms and environments like saltern ponds, which present a rainbow of vibrant colors.

Using machine learning, the research team analyzed rhodopsin protein sequences from all over the world and tracked how they evolved over time. Then, they created a type of family tree that allowed them to reconstruct rhodopsins from 2.5 to 4 billion years ago, and the conditions that they likely faced.

Their findings are detailed in a paper published in the journal Molecular Biology and Evolution.

“Life as we know it is as much an expression of the conditions on our planet as it is of life itself. We resurrected ancient DNA sequences of one molecule, and it allowed us to link to the biology and environment of the past,” said University of Wisconsin-Madison astrobiologist and study lead Betul Kacar.

“It’s like taking the DNA of many grandchildren to reproduce the DNA of their grandparents. Only, it’s not grandparents, but tiny things that lived billions of years ago, all over the world,” Schwieterman said.

Modern rhodopsins absorb blue, green, yellow and orange light, and can appear pink, purple or red by virtue of the light they are not absorbing or complementary pigments. However, according to the team’s reconstructions, ancient rhodopsins were tuned to absorb mainly blue and green light.

Since ancient Earth did not yet have the benefit of an ozone layer, the research team theorizes that billions-of-years-old microbes lived many meters down in the water column to shield themselves from intense UVB radiation at the surface.

Blue and green light best penetrates water, so it is likely that the earliest rhodopsins primarily absorbed these colors. “This could be the best combination of being shielded and still being able to absorb light for energy,” Schwieterman said.

After the Great Oxidation Event, more than 2 billion years ago, Earth’s atmosphere began to experience a rise in the amount of oxygen. With additional oxygen and ozone in the atmosphere, rhodopsins evolved to absorb additional colors of light.

Rhodopsins today are able to absorb colors of light that chlorophyll pigments in plants cannot. Though they represent completely unrelated and independent light capture mechanisms, they absorb complementary areas of the spectrum.

“This suggests co-evolution, in that one group of organisms is exploiting light not absorbed by the other,” Schwieterman said. “This could have been because rhodopsins developed first and screened out the green light, so chlorophylls later developed to absorb the rest. Or it could have happened the other way around.”

“We engineer the ancient DNA inside modern genomes and reprogram the bugs to behave how we believe they did millions of years ago. Rhodopsin is a great candidate for laboratory time-travel studies,” Kacar said.

Ultimately, the team is pleased about the possibilities for research opened up by techniques they used for this study. Since other signs of life from the deep geologic past need to be physically preserved and only some molecules are amenable to long-term preservation, there are many aspects of life’s history that have not been accessible to researchers until now.

“Our study demonstrates for the first time that the behavioral histories of enzymes are amenable to evolutionary reconstruction in ways that conventional molecular biosignatures are not,” Kacar said.

The team also hopes to take what they learned about the behavior of early Earth organisms and use it to search the skies for signs of life on other planets.

“Early Earth is an alien environment compared to our world today. Understanding how organisms here have changed with time and in different environments is going to teach us crucial things about how to search for and recognize life elsewhere,” Schwieterman said.