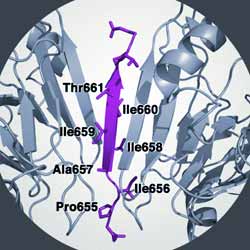 A-kinase anchoring proteins or AKAPs are known to influence the spatial distribution of kinases within the cell, crucial enzymes that control important molecular events related to the regulation of glucose levels in the blood.

In a new study published in The EMBO Journal, the team of researchers led by Simon Hinke and John Scott reveal for the first time that AKAPs influence the levels of glucose in the body by coordinating the spatial positioning of phosphatases, naturally occurring enzymes that counteract the effects of kinase enzymes.

“Our discovery that anchored enzymes contribute to the regulation of cellular events that underlie diabetes may help us to move more rapidly toward new therapies to control this increasingly prevalent metabolic disease,” commented John Scott, Edwin G. Krebs–Hilma Speights Professor of Pharmacology at the University of Washington School of Medicine, Seattle and an investigator of the Howard Hughes Medical Institute. “The observation that AKAP 150 functions by coordinating phosphatase activity in the cell reveals a new role for these anchoring proteins in the control of glucose metabolism and related metabolic disorders. It also suggests that new drugs that interfere with the role of anchoring proteins are possible therapeutic interventions to treat chronic diseases such as diabetes.”

The researchers used imaging techniques as well as genetic modification of isolated insulin-secreting cells and whole mice to investigate the impact of anchoring proteins on glucose metabolism and insulin release. Mice that lacked the gene for the AKAP150 anchoring protein produced less insulin from beta cells in the islets of Langerhans. However, they coped better with limited amounts of hormone due to increased sensitivity to insulin in the target tissues (skeletal muscle). The scientists showed that these effects are due to a seven-amino-acid sequence in the anchor protein that directly interacts with the surface of the phosphatase enzyme.
The release of insulin is the main way in which the levels of glucose are controlled in the body. If it is possible to develop drugs that target the region where anchoring proteins specifically interact with phosphatase enzymes it is feasible that insulin sensitivity could be improved in selected tissues such as skeletal muscle. This would represent a valuable new molecular control point that might offer clinical benefits for diabetics, individuals with other metabolic disorders and patients who are being treated with immunosuppressive drugs following organ transplantation.

Further information on The EMBO Journal is available at http://www.nature.com/emboj

About EMBO
EMBO stands for excellence in the life sciences. The organization enables the best science by supporting talented researchers, stimulating scientific exchange and advancing policies for a world-class European research environment.

EMBO is an organization of 1500 leading life scientist members that fosters new generations of researchers to produce world-class scientific results. EMBO helps young scientists to advance their research, promote their international reputations and ensure their mobility. Courses, workshops, conferences and scientific journals disseminate the latest research and offer training in cutting-edge techniques to maintain high standards of excellence in research practice. EMBO helps to shape science and research policy by seeking input and feedback from our community and by following closely the trends in science in Europe.

Continued climate change could spell disaster for many species. A new study from the Cornell Lab of Ornithology confirms that most birds–but not all–synchronize their migratory movements with seasonal changes…