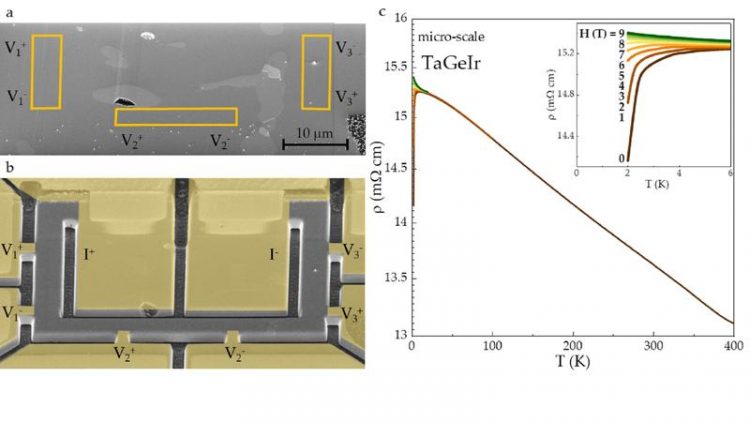 To understand the origin of conflicting reports on TaGeIr, scientists from MPI CPfS and Northwestern University investigated the deviation of the crystal structure from the ideal MgAgAs model, possibility of off-stoichiometry (presence of homogeneity range), impact of the synthesis route on the real structure, as well as metallographic features of TaGeIr.

As a result of this comprehensive study, the presence of minority phases (resulting from the phase equilibria in the ternary system and not complete homogenization even by long thermal treatment) in TaGeIr specimens were found to result in extrinsic metallic behavior, as well as in appearance of superconductivity at low temperatures.

To study intrinsic properties of TaGeIr, the manufacturing of micro-scale devices was applied (Figure 1), and semiconducting behavior of TaGeIr was conclusively established.

The semiconducting properties of TaGeIr agree with electronic band structure calculations, revealing existence of the band gap only in case of MgAgAs-type structure with iridium atoms in heterocubic site (Figure 2). The latter is consistent with single crystal diffraction studies.

The MPI CPfS ( www.cpfs.mpg.de ) is part of the Max Planck Society and was founded in 1995 in Dresden. It consists of around 280 employees, of which about 180 are scientists, including 70 doctoral students.