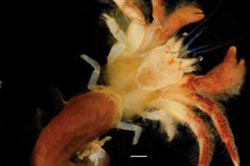 This is a photo of Areopaguristes tudgei, a new species of crab discovered by and named for American University biologist Christopher Tudge.<br><br>Credit: Photo courtesy of Rafael Lemaitre and Darryl L. Felder<br>

Areopaguristes tudgei. That's the name of a new species of hermit crab recently discovered on the barrier reef off the coast of Belize by Christopher Tudge, a biology professor at American University in Washington, D.C.

Tudge has been interested in biology his whole life, from boyhood trips to the beach collecting crustaceans in his native Australia, to his undergraduate and PhD work in zoology and biology at the University of Queensland. He has collected specimens all over the world, from Australia to Europe to North and South America.

Until now, he has never had a species named after him. He only found out about his namesake after reading an article about it in the journal Zootaxa. Apparently, finding out after-the-fact is standard practice in the highly formalized ritual of naming a new species.

The two crustacean taxonomists and authors of the paper who named the new crab after Tudge, Rafael Lemaitre of the Department of Invertebrate Zoology at the Smithsonian Institution's National Museum of Natural History and Darryl L. Felder of the University of Louisiana-Lafayette's Department of Biology Laboratory for Crustacean Research, have known Tudge since he first came to Washington in 1995 as a postdoc research fellow at the Smithsonian.

Lemaitre and Felder have been collecting specimens on the tiny Belizean island for decades and for more than 10 years, they had asked Tudge—who specializes in the structures of crustacean reproduction and how they relate to the creatures' evolutionary history—to join them on one of their semiannual research outings.

Finally, in February 2010, Tudge joined them on a tiny island covered with hundreds of species of their favorite fauna.

It was crab heaven for a cast of crustacean guys.

“So you can take 40 steps off the island and you're on the edge of the reef, and then the back part of the reef is what they call the lagoon,” Tudge recalled. “You slowly walk out into ever-increasing depths of water and it's a mixture of sand and sea grass and bits of coral, and then there's some channels. There's lots of different habitats there. Some islands are covered by mangroves. So we would visit all the different habitats that were there.”

“We would collect on the reef crest, go and turn over coral boulders on the reef flat, snorkel over the sea grass beds. We pumped sand and mud to get things out of the ground. We walked into the mangroves and collected crustaceans from under the mangrove roots. We even snorkeled in the channels in the mangrove islands.”

But discovering the new species was much less involved: Tudge turned over a coral boulder in an intertidal area, saw 50 or so tiny crabs scrambling around, and stuck a dozen or so specimens in a bottle before going on with his work.

Only later in the lab, under the microscope, was it determined that this isolated little group of hermit crabs might be unique.

As the journal authors write: “Given this cryptic habitat and the relatively minute size of the specimens (shield length range = 1.0-3.0 mm), it is not surprising that these populations have gone unnoticed during extensive sampling programs that have previously taken place along the Barrier Reef of Belize.”

Tudge found out only recently found out that Areopaguristes tudgei—a tiny hermit crab differentiated from others in its genus by such characteristics as the hairs growing on some of its appendages—was joining the list of about 3 million known species.

Lemaitre emailed him a PDF of the finished article. A note said only, “Here's a new species. What do you think?” The note had a smiley emoticon.

That's the way it works, said Tudge's colleague American University's College of Arts and Sciences, biology professor Daniel Fong. There's no warning; one day you just find out. Fong has also had species named after him, and he has discovered new ones as well.

“You go through several emotions when a species has been named after you,” Fong said. “It is truly an honor, in the most formal sense of the term, that your colleagues have thought of naming a species after you. It is a very special type of recognition of your contribution to your research field by your colleagues.”

Amid their exhaustive taxonomic description, complete with drawings and photographs of Areopaguristes tudgei, the journal article authors explain why they chose its name: “This species is named after our colleague Christopher C. Tudge (American University) who first noticed and collected populations of this diminutive hermit crab living under large dead coral boulders during joint field work in Carrie Bow Cay. The name also acknowledges his unique contributions to knowledge of the reproductive biology of hermit crabs.”