Alzheimer's disease and diabetes: Hope for inhibitors against amyloid plaques 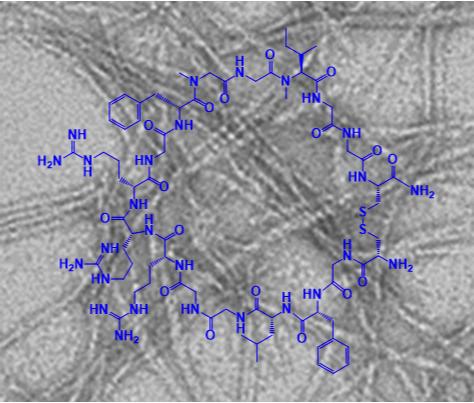 A new class of designed macrocyclic peptides has been developed which are highly potent inhibitors of amyloid plaque formation. Picture: Kapurniotu/ TUM

Amyloid plaques, which are protein deposits, play a crucial role in the development of Alzheimer's disease and type 2 diabetes. Several teams of scientists around the world are working on finding ways to prevent amyloid plaque formation in the human brain.

The research team of Aphrodite Kapurniotu, Professor for Peptide Biochemistry (TUM) has been working on an idea for some time now in collaboration with the teams of Professor Martin Zacharias (TUM), Professor Gerhard Rammes (TUM Rechts der Isar Hospital) and Professor Jürgen Bernhagen (Institute for Stroke and Dementia Research (ISD) at Ludwig Maximilian University (LMU)). The researchers present now macrocyclic peptides (MCIPs) as potent inhibitors of amyloid formation; they reported their results in the journal “Angewandte Chemie”. The work has been supported by Deutsche Forschungsgemeinschaft (DFG) collaborative research center SFB 1035.

In its new study, the team presents macrocyclic peptides, developed as a new class of amyloid inhibitors. “We have discovered an MCIP that is stable in human blood plasma and can also overcome the human blood-brain barrier in an in vitro cell culture model,” explains Professor Kapurniotu.

She adds: “So far we were 'only' able to demonstrate these properties in the test tube – thus further research is necessary. But these are two highly desirable properties for inhibitors of Alzheimer's amyloid.”

TUM has already applied for a patent for the newly developed macrocyclic peptides. “They could be a good alternative to the currently pursued antibody-based approaches as therapeutics against Alzheimer's amyloid plaque formation because they are easy to produce, have promising properties and, due to their peptidic nature, they will be significantly cheaper than antibodies,” says Professor Kapurniotu.

“Therefore, further investigations are now planned to verify whether the MCIPs are also effective in in vivo models. Furthermore, the MCIPs could also be suitable as templates for the development of small molecule peptidomimetics (molecules mimicking peptide chains), which might also find application as anti-amyloid drugs in Alzheimer's and type 2 diabetes.

Further information:
The research work was funded by the German Research Foundation (DFG) within the SFB 1035.