Acetic acid as a proton shuttle in gold chemistry 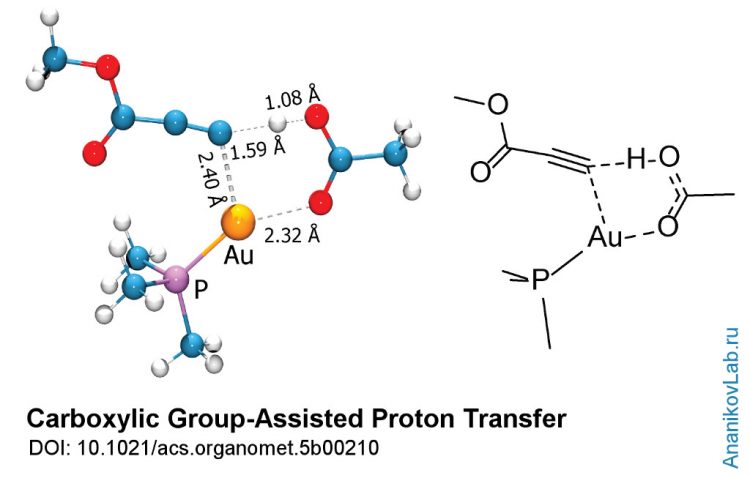 A recently published study by Ananikov and co-workers gives a vivid example of unusual chemical reactivity found in the reactions with organogold complexes. Using the complex of modern physical methods joined with computational studies, the authors proposed reaction mechanism, where a molecule of acetic acid serves as a proton shuttle, transferring the hydrogen atom between the reaction centers.

Being found mostly in the native state, gold is one of the oldest elements known to man. The affection to gold was determined by it's unusual properties – heft, shine and ability to withstand oxidation and corrosion. The combination of properties determined gold use in the jewelry and as a coinage metal.

The ancient alchemists working with gold were struggled by utmost chemical resistance of this element – it did not react with concentrated acids or alkali solutions even at high temperatures. Actually, it is the chemical inertness that makes gold to appear in a native form and not as a part of a mineral.

Later analysis established that gold compounds can not only compete with traditional nickel and palladium-based catalysts in the common reactions, but to surpass them. Besides that, gold compounds often demonstrated principally novel types of reactivity compared to well-established catalysts. This allowed chemists to discover a bunch of new chemical reactions and predetermined a fascinating boom in gold catalysis that we have observed in the recent years.

Professor Ananikov and co-workers introduced gold into well-known catalytic system which led to dramatic change of the reactivity and furnished the formation of novel gold-containing complexes. The complexes appeared to be air stable and were isolated in the individual state. A single crystal X-Ray diffraction study ascertained the existence of unique structural motif in the molecule, which can not be explained within conventional mechanistic framework.

The study was carried out using both theoretical and experimental approaches. Dedicated labeling of the reagents allowed observation of molecular re-organizations. Variation of reaction conditions helped to estimate key factors governing the discovered transformation.

In addition, computational study of the reaction provided the models of certain intermediate steps, which were invisible for experimental investigation. The theoretical data obtained was in excellent agreement with experiment, proposing the reaction mechanism, where a molecule of acetic acid serves as a proton shuttle, transferring the hydrogen atom between the reaction centers.

The belief of gold inactivity towards chemical transformations resulted in the fact, that organometallic chemistry of gold was developed significantly later compared to other coinage metals (like silver, nickel or copper). Today, our goal is to “introduce gold catalysis as a valuable practical tool in fine organic chemistry, competitive with other transition metal catalysts”, says Prof. Ananikov.