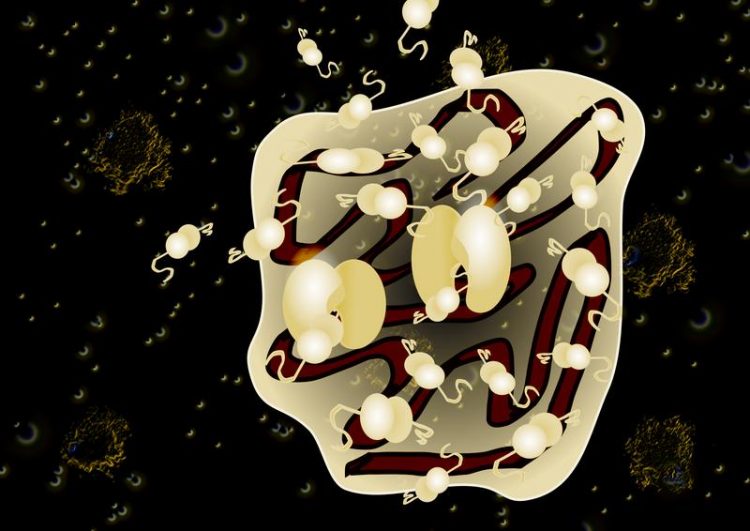 Proteins diffusing in and around an RNA granule inside the cell, against a backdrop of other RNA granules. (Artistic impression, picture: Ina Poehner, Kashif Sadiq)

Cells are thought of as the basic unit of life. Each is a dynamic micro-world of billions of molecules involved in complex biochemical reactions. Cells control many of these internal reactions by physically separating the required molecules into membrane-bound compartments.

But, remarkably, when subjected to stress, such as extreme temperatures, mechanical damage and toxins, cells can also form membrane-less granules. These granules often contain self-assembled, condensed mixtures of proteins and long biopolymers like ribonucleic acids (RNAs) – together known as ribonucleoproteins (RNPs).

Excitingly, granules can co-exist in different phases of matter: liquid, gel, solid or even somewhere in between. And their function is still largely unknown. With theory and computer simulations, Dr. Kashif Sadiq from the Heidelberg Institute for Theoretical Studies (HITS) wants to explore the biophysical properties of these membrane-less granules. His independent research project called “RNA Epicatalysis” just started and is funded by the Volkswagen Stiftung with an “Experiment!” grant for 18 months.

The main question Dr. Sadiq addresses in this project is whether the rate of enzymatic reactions in such granules might be accelerated. He aims to explore which factors affect and regulate their biomaterial properties and whether RNA is just a passenger or an active driver of this process. And if accelerated catalysis is possible, what is the basic physical mechanism that underpins it? Could specific macromolecular assemblies facilitate diffusion in these kinds of biomaterials? These questions have thus far remained inconclusive.

“Conventional enzymology would dismiss this counterintuitive idea because crowding by biopolymer meshes like RNP should slow down diffusion of enzymes and substrates”, Sadiq emphasizes. “But if true, that these granules can accelerate reactions, it would challenge the current paradigm of molecular biology yet again because it would imply a level of catalysis in cells above that of known enzymatic regulation.”

Shedding light on the origins of life

In doing so, Sadiq´s research aims to also shed light on some of the fundamental questions regarding the origins of life on Earth: Were the earliest self-replicating biomolecules billions of years ago able to self-organize into separated compartments – where biochemical reactions that aided their survival could be enhanced – only by using the physical laws of phase-separation, long before the first membraned-protocells had even evolved?

Dr. Kashif Sadiq read Natural Sciences at the University of Cambridge, UK, specializing in Theoretical Physics and writing his master’s thesis on the relativistic properties of fast plasma ejections around black holes. He earned his PhD in Computational Biophysics at University College London, UK and later worked in Postdoc positions in the UK and Spain – investigating the molecular dynamics, macromolecular assembly and catalytic reactions of biomolecules and biopolymers. Since 2016, Kashif Sadiq is a senior researcher in the Molecular and Cellular Modeling group (head: Prof. Rebecca Wade) at HITS.

The Volkswagen Foundation’s funding initiative 'Experiment!' tries to pave the way for fundamentally new research topics even though the outcome carries significant risk. Both a concept failure as well as unexpected findings are acceptable results. The funding initiative 'Experiment!' started in November 2012. It is both competitive and exceptionally well received with on average more than 500 applications per call. In the last call in 2017, 29 projects out of 594 proposals were selected.

About HITS
The Heidelberg Institute for Theoretical Studies (HITS) was established in 2010 by the physicist and SAP co-founder Klaus Tschira (1940-2015) and the Klaus Tschira Foundation as a private, non-profit research institute. HITS conducts basic research in the natural sciences, mathematics and computer science, with a focus on the processing, structuring, and analyzing of large amounts of complex data and the development of computational methods and software. The research fields range from molecular biology to astrophysics. The shareholders of HITS are the HITS Stiftung, which is a subsidiary of the Klaus Tschira Foundation, Heidelberg University and the Karlsruhe Institute of Technology (KIT). HITS also cooperates with other universities and research institutes and with industrial partners. The base funding of HITS is provided by the HITS Stiftung with funds received from the Klaus Tschira Foundation. The primary external funding agencies are the Federal Ministry of Education and Research (BMBF), the German Research Foundation (DFG), and the European Union.