A thin ribbon of flexible electronics can monitor health, infrastructure 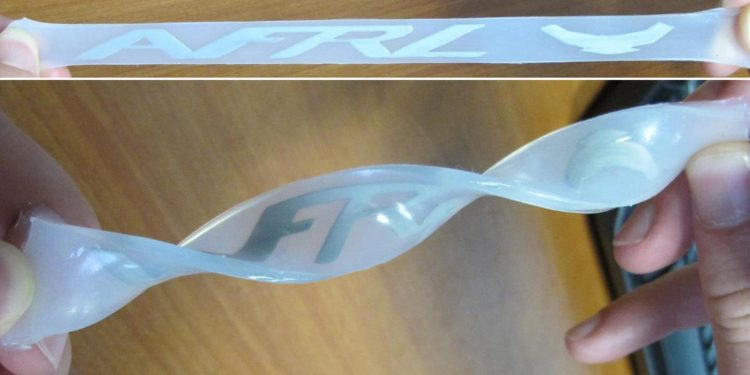 Stretchy, bendable electronics could have many uses, such as monitoring patients' health and keeping tabs on airplanes. Credit: Benjamin Leever, Ph.D.

Researchers will provide an update on the latest technologies, as well as future research plans, at the 250th National Meeting & Exposition of the American Chemical Society (ACS). ACS is the world's largest scientific society. The meeting takes place here through Thursday.

“Basically, we are using a hybrid technology that mixes traditional electronics with flexible, high-performance electronics and new 3-D printing technologies,” says Benjamin J. Leever, Ph.D., who is at the Air Force Research Laboratory at Wright-Patterson Air Force Base. “In some cases, we incorporate 'inks,' which are based on metals, polymers and organic materials, to tie the system together electronically. With our technology, we can take a razor-thin silicon integrated circuit, a few hundred nanometers thick, and place it on a flexible, bendable or even foldable, plastic-like substrate material,” he says.

To allow electronics to be bendable or stretchable or even change their configuration after fabrication, the Wright-Patterson team has turned to liquid gallium alloys as an electrical interconnect material, Leever says. “While these liquid alloys typically oxidize within minutes and become essentially useless,” he says, “the team has been able to dramatically reduce the effects of the oxidation through the use of ionic species confined to the walls of microvascular channels within the flexible substrates.”

The result is thin, foldable material that allows the circuitry to fit into extremely tight spaces and even to be integrated into complex curved surfaces, such as an airplane's wing, or even a person's skin.

In aircraft applications, Leever explains, the hybrid flexible system can be used to monitor stresses and strains and report this information through miniature embedded antennas to ground crews or a pilot. The researchers also are developing the same approach to monitor pilots' health. This involves a biosensor system that can measure heartbeat, hydration levels, sweat, temperature and other vital signs through miniature circuitry. The system would be embedded on a flexible, wearable patch and would include an antenna to transmit these biometric signals to the pilot or a ground team. The patch will “breathe,” bend and stretch, and will provide real-time measurements of metrics that indicate fatigue or potential cognitive problems, Leever notes.

Another military application the Air Force is pursuing is use of a flexible hybrid system in “bunker buster” bombs, which detonate after penetrating deep in the earth. Because of the system's toughness, Leever says, initial testing suggests that the flexible circuitry would remain viable and could detonate the weapon after surviving the initial impact of ground contact after being dropped from aircraft.

In the civilian world, Leever foresees use of flexible systems to monitor the conditions of bridges and other types of infrastructure in real time. He also points to medical applications, such as physical feedback for athletes as they exercise and real-time hospital monitoring for caregivers concerned about changes in a patient's vital signs. This type of monitoring dispenses with the need for the bulky electrodes and wiring that normally are associated with close medical surveillance.

“Overall, the military has the advantage of being able to move ahead with potentially higher risk research,” he explains. “Commercial investors want a clear demonstration before making an investment. The military can pursue possibly transformational applications at earlier stages if we see a promising approach to realize and advance a technology's revolutionary potential. When we are successful, the commercial sector directly benefits.”

Leever adds that the Wright-Patterson team is part of a newly created Department of Defense-led Flexible Hybrid Electronics Manufacturing Innovation Institute, which was announced by President Barack Obama last December. Over the next five years, $75 million will be offered in matching grants to spur domestic development of flexible hybrid electronics manufacturing.

A press conference on this topic will be held Monday, Aug. 17, at 1 p.m. Eastern time in the Boston Convention & Exhibition Center. Reporters may check-in at Room 153B in person, or watch live on YouTube http://bit.ly/ACSLiveBoston. To ask questions online, sign in with a Google account.

The American Chemical Society is a nonprofit organization chartered by the U.S. Congress. With more than 158,000 members, ACS is the world's largest scientific society and a global leader in providing access to chemistry-related research through its multiple databases, peer-reviewed journals and scientific conferences. Its main offices are in Washington, D.C., and Columbus, Ohio.

Related to these goals, we are developing approaches to inject and print gallium-based liquid metal alloys into varied materials for stretchable and reconfigurable electronics. For energy devices we have demonstrated solution-processable approaches to fabricate organic photovoltaic devices on nearly arbitrary surfaces including PET and polymer reinforced polymer composites. We have also fabricated Li-ion batteries based on structurally resilient carbon nanotube-based electrodes that have survived thousands of flexing cycles. The presentation will also discuss the development of silver inks as an interconnect material for flexible Si CMOS ICs on elastomers. Finally, initial molecular dynamics based approaches to model the interaction of inks on various surfaces will also be described.