A shortcut in the global sulphur cycle 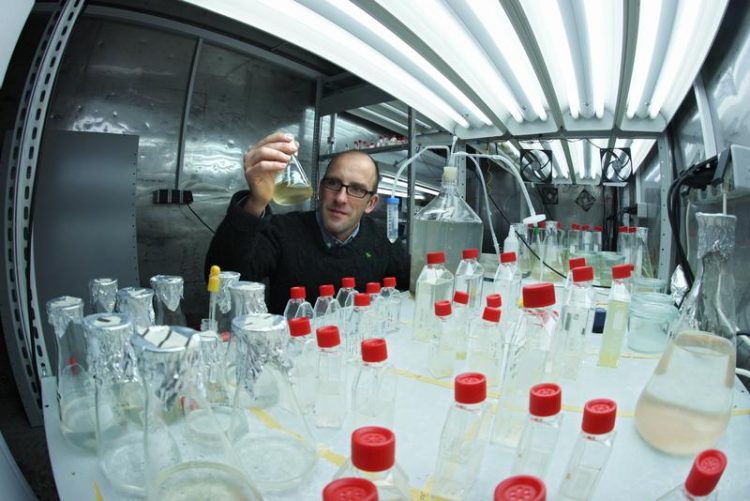 Prof. Dr Georg Pohnert and his team at the University Jena found a new chemical compound produced by single-cell algae and bacteria, which form part of the plankton in the sea. Photo: Jan-Peter Kasper/FSU

Sulphur is found in many different compounds throughout the world – not only in the atmosphere, but also in the oceans and on land. All these manifestations are connected in a cycle. To put things simply, the element in its mineral form is reduced and transferred into organic compounds.

These are passed around by organisms before finally reaching the atmosphere, where they are oxidized before they return to the land and seas in the rain. While we have known about this for some time, chemists at the Friedrich Schiller University Jena (Germany) and their US colleagues have now discovered a completely unexpected shortcut in the cycle. This process is determined by tiny organisms in the ocean’s plankton. The scientists have described their discovery in the latest edition of the renowned research journal “Nature”.

‘We’ve found that certain single-cell algae and bacteria, which form part of the plankton in the sea, produce a new chemical compound with the complicated name “dimethylsulphoniopropionate”, or “DMSOP” for short’, explains Prof. Dr Georg Pohnert from the University of Jena.

‘This has allowed us to deduce valuable information about the global sulphur cycle, and we can now provide a new explanation for huge quantities of sulphur flow in the cycle. Even though one microalga only produces negligible quantities of the compound, we’re talking about several teragrams in total, so several billion kilograms a year’.

This is because single-cell algae are incredibly active in the world’s oceans. The findings made by Jena’s chemists give us a better understanding of the earth’s sulphur cycle, which offers important knowledge for atmospheric and climatic models.

However, the information offered by the research results doesn’t just help us to better understand the sulphur cycle; the scientists found one reason for the production of DMSOP by investigating how the algae adapt to their environment.

‘These single-cell organisms are permanently moving around in the sea, and so they’re constantly exposed to different salt contents and oxidative stress’, explains Pohnert. ‘The new compound now shows how this stress can be balanced out through a sophisticated system of chemical reactions. One way of doing this is by producing and breaking down highly polar organic molecules. And the new sulphurous metabolic product plays a key role here’.

Jena’s scientists, whose work was supported by the German Research Foundation’s ‘ChemBioSys’ collaborative research centre, examined water samples from various regions of the oceans, in order to establish whether the production of the sulphurous compound was a global phenomenon.

‘We found DMSOP in all samples from the Arctic to the Mediterranean’, explains Prof. Pohnert, who also works at the University of Jena’s Cluster of Excellence, “Microverse”. ‘So, producers of the sulphurous compound can be found everywhere’.

These new results have provided the chemists at the University of Jena with important information about the functioning of microbial communities in the ocean, and the results are also relevant for possible applications. ‘More and more algae are being grown in aquaculture to produce animal feed, foodstuffs and energy. That’s why it’s important to fully understand their metabolism’, says the expert from Jena. ‘Our current insights have once again revealed what an incredibly complex and effective system is hidden away in plankton’.