A rapid mechanism for muscle self-repair independent of stem cells 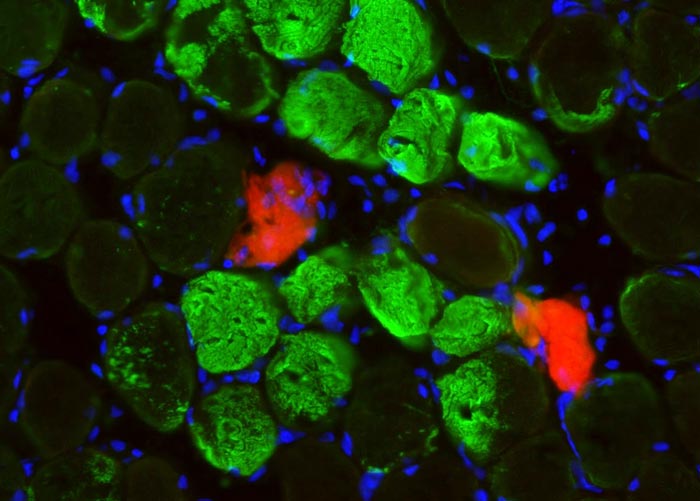 Visualization of local damage in skeletal muscle fibers (soleous and gastro) of young mice after exercise, by staining with local damage markers such as Filamina C (green) and Evans Blue (red), and nuclei (in blue) of fibers.
Credit: UPF /CNIC

A new study led by Spanish researchers describes a new mechanism for muscle repair after physiological damage relying on the rearrangement of muscle fibre nuclei, and independently of muscle stem cells.

Muscle is known to regenerate through a complex process that involves several steps and relies on stem cells. Now, a new study led by researchers at Pompeu Fabra University (UPF, Spain)/Centro Nacional de Investigationes Cardiovasculares (CNIC, Spain)/CIBERNED (Spain) and Instituto de Medicina Molecular João Lobo Antunes (iMM, Portugal), published on 15 October in the journal Science, describes a new mechanism for muscle repair after physiological damage relying on the rearrangement of muscle fibre nuclei, and independently of muscle stem cells. This protective mechanism paves the way to a broader understanding of muscle repair in physiology and disease.

Skeletal muscle tissue, the organ responsible for locomotion, is formed by cells (fibres) that have more than one nucleus, an almost unique feature in our body. Despite the plasticity of these fibres, their contraction can be associated with muscle damage. William Roman, first author of the study and researcher at UPF, explains: “Even in physiological conditions, regeneration is vital for muscle to endure the mechanical stress of contraction, which often leads to cellular damage”. Although muscle regeneration has been investigated in depth in recent decades, most studies centred on mechanisms involving several cells, including muscle stem cells, which are required when extensive muscle damage occurs”.

“In this study we found an alternative mechanism of muscle tissue repair that is muscle-fibre autonomous”, says Pura Muñoz-Cánoves, ICREA professor and principal investigator at UPF and the CNIC, and study leader. Researchers (including Antonio Serrano (UPF) and Mari Carmen Gómez-Cabrera (University of Valencia and INCLIVA) used different in vitro models of injury and models of exercise in mice and humans to observe that upon injury, nuclei are attracted to the damage site, accelerating the repair of the contractile units. Next, the team dissected the molecular mechanism of this observation: “Our experiments with muscle cells in the laboratory showed that the movement of nuclei to injury sites resulted in the local delivery of mRNA molecules. These mRNA molecules are translated into proteins at the site of injury to act as building blocks for muscle repair”, explains William Roman. “This muscle fibre self-repair process occurs rapidly both in mice and in humans after exercise-induced muscle injury, and thus represents a time- and energy-efficient protective mechanism for the repair of minor lesions”, adds Pura Muñoz-Cánoves.

In addition to its implications for muscle research, this study also introduces more general concepts for cell biology, such as the movement of nuclei to injury sites. “One of the most fascinating things about these cells is the movement during the development of their nuclei, the biggest organelles inside the cell, but the reasons why nuclei move are largely unknown. Now, we have shown a functional relevance for this phenomenon in adulthood during cell repair and regeneration”, says Edgar R. Gomes, group leader at the Instituto de Medicina Molecular and a professor at the Faculty of Medicine at the University of Lisbon, who co-led the study.

On the importance of these discoveries, Pura Muñoz-Cánoves, Antonio Serrano and Mari Carmen Gómez-Cabrera agree that: “This finding constitutes an important advance in the understanding of muscle biology, in physiology (including exercise physiology) and muscle dysfunction”.

The work was conducted at UPF/CNIC/CIBERNED and at the iMM in collaboration with the University of Valencia/INCLIVA.

This study was funded by the European Research Council, Association Française contre les Myopathies, the European Molecular Biology Organization, the Human Frontiers Science Program, and the Spanish Ministry of Science.

UPF (and the CEXS Department in particular) and CNIC are two centres of excellence (María de Maeztu and Severo Ochoa, respectively) devoted to Biomedicine and Cardiovascular research.

The Network Center for Biomedical Research in Neurodegenerative Diseases (CIBERNED) is a research body founded by the Spanish Government to fuse basic and clinical research targeting pathologies of great importance for the National Health System.

The Centro Nacional de Investigaciones Cardiovasculares (CNIC), directed by Dr. Valentín Fuster, is dedicated to cardiovascular research and the translation of knowledge gained into real benefits for patients. The CNIC, recognized by the Spanish government as a Severo Ochoa center of excellence, is financed through a pioneering public-private partnership between the government (through the Carlos III Institute of Health) and the Pro-CNIC Foundation, which brings together 12 of the most important Spanish private companies.